THIRD VISIT TO THE U.S.A. AND TOUR OF EUROPE 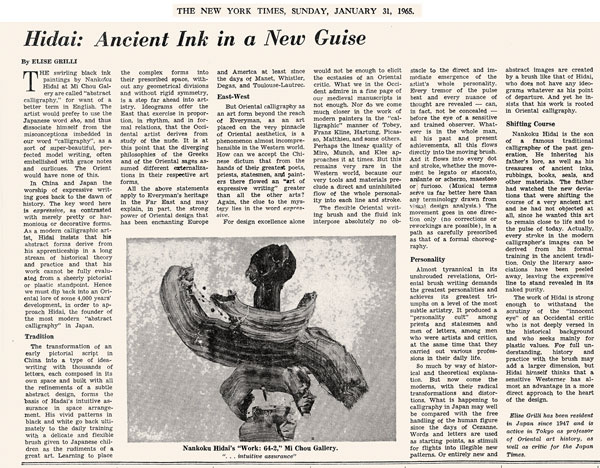 Late in 1964, Nankoku visited to the U.S. the third time, in order to hold a one-man-show at Mi Chou Gallery in New York. Mrs. Elise Grilli’s article on his one-man-show appeared at the front page of New York Times, and his one-man-show created a great sensation. Nankoku’s works by ‘Ancient Ink in a New Guise’ were valued highly as a classic and original attempt by which Nankoku’s line could express the inner spirit of artist, the personality of artist, in a different line from Western painting’s line, such as lines of Miro and Paul Klee.

Nankoku sprang into fame, and in May of 1965, he held the legendary performance with the avant-garde painters living in New York, Piere Alechinsky and Walasse Ting , using a big ink brush. In this film we can see that as compared with Nankoku’s sensitive brush-stroking, Alechinsky and Ting filled up the blank space excessively.

Also he taught Sho-techniques to artists in New York and New Jersey, such as Kurt Sonderborg, Raymond Parker, Ulfert Wilke etc. This time Nankoku lectured at Rudolph Schaeffer School of Design, Princeton University, Antioch College, Mount Holyoke College, Earlham College, Smith College, Fairleigh Dickinson University, University of Massachusetts, in theU.S.A. In addition, in the middle of May, he made a tour of Europe in a tight schedule, and lectured at Rijksmuseum voor Volkenkunde, in the Netherlands; Bath Academy of Art, Royal College of Arts, Oxford University, Institute of Contemporary Arts, in England; Städelschule (Staatliche Hochschule für Bildende Künste, Frankfurt), Universität Heidelberg, in West Germany: Istituto Giapponese di Cultura, in Rome of Italy. These activities were reported in New York Times, Washington Post, and The Times Magazine and so forth.