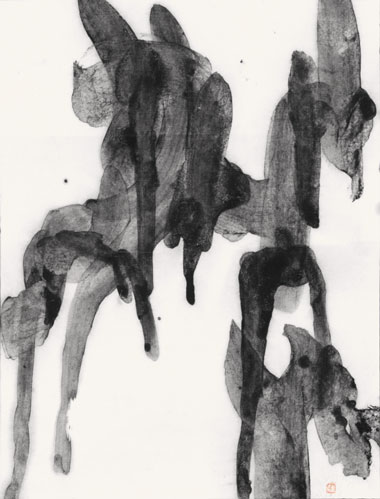 Nankoku had the consistent belief that ‘the essence of the art of calligraphy was the line expression which depends on a disciplined stroke, ’ all his life. He tried various experiments in the ways of line expression in order to demonstrate the validity of his belief.

Early, in 1954, he exhibited the ‘Hi-haku (Flying White form)’ works. Hi-haku was invented by Cai Yong(133-192 A.D.) in the Han Dynasty and current through the end of the T’ang Dynasty when it almost disappeared. In Japan Kukai once tried Hi-haku, but it was almost no inherited.

In 1955, Nankoku chose oils on canvas for the experiment in materials. And from 1956 to 1959 when he visited to America first time, he tried works with various materials, such as lacquer board works, works by way of blurring ink in the water on board, writing on the old rubbing, scratching the oil-painted board with a piece of bamboo or tires, without stroking ink brush.

It is necessary to fix the stroking brush movement on paper so that the line expression can reveal the personality of the artist. After repeated trial and error, Nankoku discovered a new technical process, a mixture of benzene and black oil paint. This liquid did not have the viscosity of caked ink but allowed the brush full freedom in executing large works. Moreover it showed the layering of line over line with a translucent appearance, and therefore could fix the line of brushstroking quite closely. He used it in the works he exhibited at the 5th Exhibition of Biennial of São Paulo (in 1959).

Nankoku continued to collect antique inks seeking the ideal ink , during experimenting a variety of materials. Just before his first visit to America, Nankoku bought an unusually large, old Chinese ink. “Sung Dynasty” was written on the box, but suspected It wasn’t really so old. One day, when he rubbed this ancient ink and mixed it with another old ink, the mixture suddenly curdled. The strokes written with this mix, differing somewhat from those stroked with oil paint and benzene, had more subtlety and a greater sense of movement. Moreover, as this ink dried, it retained the exact traces of the brush at the moment it was stroked. This was the ideal medium! Excited with this discovery, Nankoku made numerous compositions. Nankoku’s works with this mysterious ink appeared the powerfulness and profundity of his artistic line expression, and both in Japan and overseas gave rise to great wonder and praises.