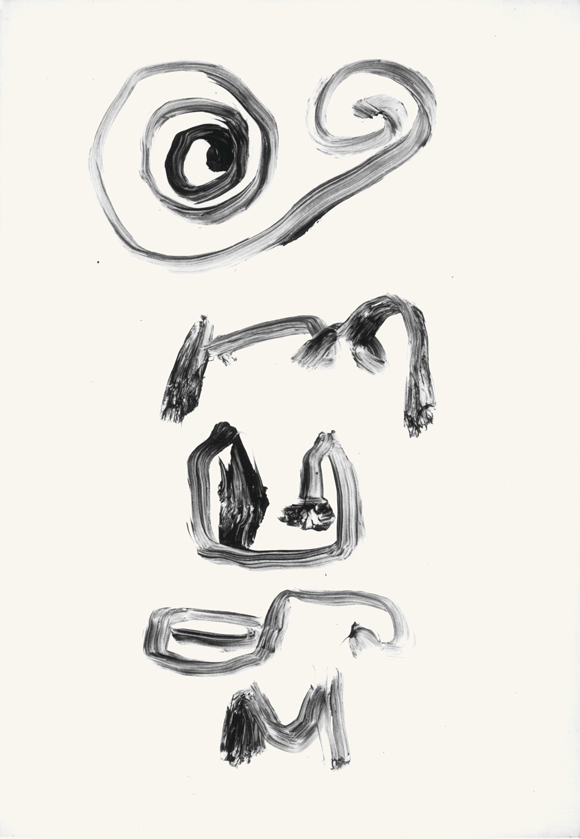 In 1945, it may be that the ending of the war precipitated this new birth. But the motif in my mind was hard to make a definite shape. …… This continued for some time, until I suddenly remembered my father’s admonition, ‘If you come to an impasse, return to the origin.’ I remembered ‘ku-wen’ (ancient script) and began leafing through the Ku-chou Hui-pien, a dictionary of ku-wen. The character ‘den’ (‘tien’ in Chinese, lightning) attracted me in a curious way and I began working it. The result was Spirit Line Work No. 1, which turned out to be variations on ‘den’.
“Until Spirit Line Work was born”, 1955.
The tradition of linear expression is 4000 years old, and each period reveals something about the people’s mind at that time ― vigor, degeneracy, grace or whatever. …… Oriental calligraphy is more than beautiful writing; it is valued not for the meaning of the character, but the meaning of the lines in which it is drawn. Abstract calligraphy is an extension of the Oriental desire to express the inner being in line. The emphasis is inward, rather than outward. When people say of one of my works, “This is beautiful,” it doesn’t mean anything to me. It must say ‘ Hidai.’
“Nankoku’s Words” in The Washington Post, Nov..30. 1964.
What I have produced may be regarded as only a series of experiments. …… If there is any merit at all in my work, it may be that I have had to be honest at all stages.
“Preface” in ’ Works of Hidai Nankoku ’, selected by the author, Sep. 1987. 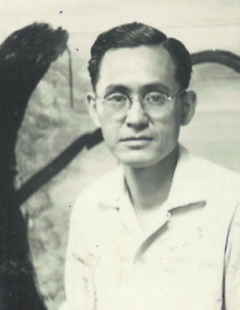 Real name; susumu. He was born in 1912, as the second son of Tenrai and Shokin. After death of Tenrai, he took over ‘Shogakuin’ (Institute of Calligraphic Studies) and managed Tenrai’s valuable collection of rubbings, ancient Chinese calligraphy books. At the same time, in Shogakuin Publications he continued to publish ancient Chinese books; he promoted the spread of classical calligraphy.

In 1945, he wrote ‘Den-no-Variation’( Lightning -Variation), the first avant-garde work apart from the characters for the first time in history of calligraphy, showed the following year, and created a sensation in the calligraphy world.

14 times One-man-shows in Tokyo, New York etc. Requested exhibits in many contemporary calligraphy or fine art exhibitions. The Museum of Modern Art (MoMA) in New York and notable collectors purchased his works. Also, he lectured the accurate history of calligraphy at more than 20 universities, such as Princeton University in America, Oxford University in England.
In 1999, Died on October 15, at the age of 87.