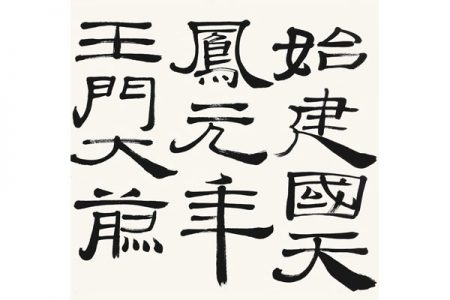 Nankoku was born as the second son of Tenrai Hidai called “the father of the contemporary calligraphy”, and Shokin Hidai, a master of kana calligraphy. Nankoku was born into this“calligraphic" household, and his early childhood was spent in a free atmosphere created by understanding and extraordinary parents. In middle school, Nankoku developed an interest in music, and he was also interested in calligraphy. During his second year, he began browsing through his father’s library on his own, voraciously copying at random books of classical ink rubbings. We perceive his keen sense in the practice works of printing and photography in Tokyo Koto Kogei Gakko (Tokyo Technological College, now Chiba University), which are leading to the later works of his intellectual constructiveness and serene lyricism. 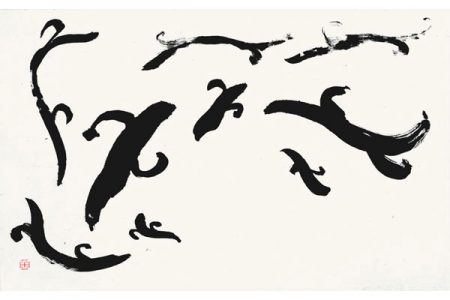 Immediately after the war, Nankoku was evacuated to Nagano Prefecture. Nankoku inquired of himself how the future of Japan would go after the defeat, and wondered whether calligraphy could be significant for its future, depending on the peculiarity of the Orient. His distress was almost unbearable in the situation with no obvious solution. He suddenly remembered his father’s admonition, ‘If you come to an impasse, return to the archaic(or origin),’ He remembered ‘ku-wen’ (archaic script) and leafing through the Ku-chou Hui-pien, a dictionary of Ku-wen. The character ‘den’ (‘tien’ in Chinese, lightning ) attracted him in a curious way and he began working it. The result was Spirit Line Work No. 1, which turned out to be variations on ‘den’.” These are a series of his works after the discovery of ‘Spirit Line’. 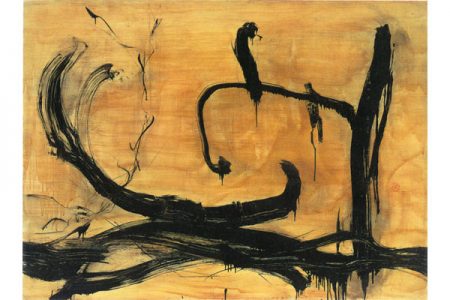 From 1955, Nankoku’s works changed amazingly. In terms of materials, he used oils on canvas and pursued the possibility of line expression by trying various materials, such as lacquer board works, works by way of scratching the oil-painted board with a piece of bamboo or tires, without stroking ink brush. He experimented with the effect from necessity to contingency in various materials, using his knowledge and ability. 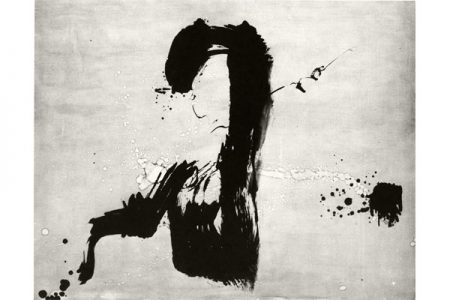 From 1958 to 1959, Nankoku discovered a new technical process, a mixture of benzene and black oil paint. This liquid did not have the viscosity of caked ink but allowed the brush full freedom in executing large works. Moreover it showed the layering of line over line with a translucent appearance, and therefore could fix the line of brush-stroking quite closely. He used it in the works he exhibited at the 5th Exhibition of Biennial of São Paulo (in 1959). 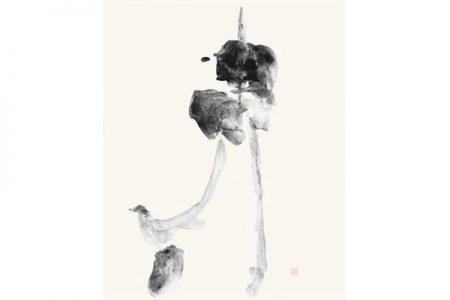 Nankoku began to collect antique inks seeking the ideal ink in 1957. Just before his first visit to America, Nankoku bought an unusually large, old Chinese ink, paying high price. He satisfied this ink and used it on ‘Gasen-shi (Xuan paper)’. One day, when he rubbed this ancient ink and mixed it with another old ink, the mixture suddenly curdled. The strokes written with this mix, had more subtlety and a greater sense of movement. Moreover, as this ink dried, it retained the exact traces of the brush at the moment it was stroked. This was the ideal medium! Excited with this discovery, Nankoku made numerous compositions 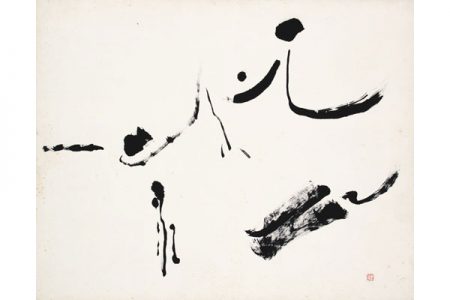 Between 1960 and 1961, Nankoku’s works changed again. He saved the power of lines so extremely, as their preceding dynamism would disappear, and the open space dominated much the work. He grew tired of the pursuit of vigorous strokes, while his concern for space strengthened, said Nankoku. At this point, he attempted an experiment with sparse, economic strokes to see if the effect of ‘hitsui’ (mind of stroke) could create a strong composition in space, as some traditional masterpieces of calligraphy. The works of this period indicate his recognition of the yin side of his nature, owing to the stay in America for one year and six months and his change of state of mind after returning to Japan. It seemed that he was not interested in the outwards any more, but he concentrated on his inwardness. 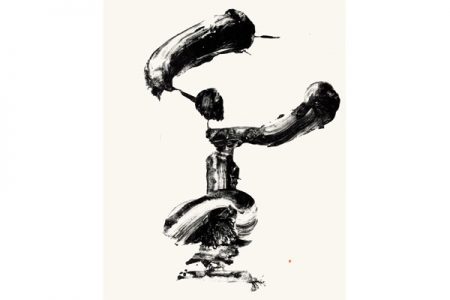 After the days of slim line, Nankoku came to an impasse——‘a complete dead end’——, and so he returned to the simplicity of the dot and the horizontal line. Again he began to use the curious old caked ink and wrote on torinoko paper, which was a non-absorbent Japanese paper and well-suited to its properties. He felt relieved both mentally and physically, and created works in great quantities one after another in 1961 to 1964. These works are characterized by the constructive compositions with bold and strong line. And also, just as in traditional calligraphy a strict order of brush strokes is observed. These works might be considered more calligraphic and less painterly than those of the past. With these works, Nankoku made two more tours of the U.S.A (in 1963 and again in 1964-1965) and held exhibitions in New York. The New York Times carried a half-page review of his work in 1965, and he was a great success as artist. 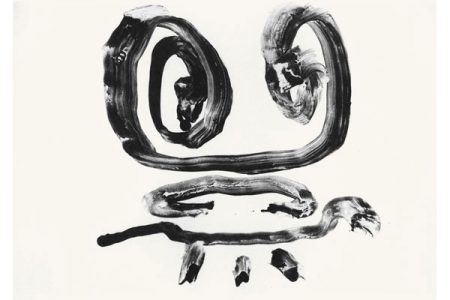 Nankoku kept on producing his works with confident, but he was faced with the technical improvement of Yokohama Seihan Kenkyujo and he discontinued his creative activities and then devoted all his energies to improve the printing precision. In 1967, after finally recovering business, he held a one-man-show after a long time. Nankoku tried new technical process with the curious ink in his one-man show. Using materials, such as acrylic gesso and tinted acrylic, the works were indestructible and water-resistance. At the opening party, he used one such work as a table top. He showed that the soiled work with spilled drinks was not damaged and cleaned off by wiping with cleanser. Nankoku’s work style also changed; his works shifted from the powerfulness and profundity of the line expression to the unpretentious, free, simple but elegant line. A face-like work showed full of humor, inspired from Chines ‘居延漢簡(Juyan Han). After that, his works were increasingly unrestricted and some were composed of a few small dots and lines or some were made full use of open space (yohaku ). These works appeared the art with the essential nature of a person, Nankoku Hidai, free from the stereotyped framework of calligraphy or painting. 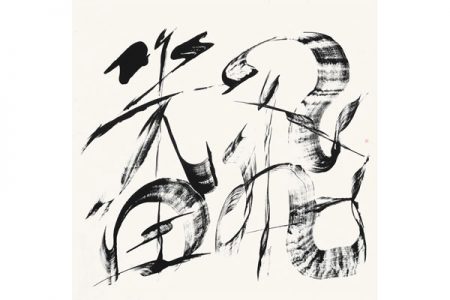 Nankku practiced Sho (calligraphy) apart from characters, but except for Rin-Sho. He left a wide range of Rin-Sho pieces, in addition to his favorite王羲之(Wang Xizhi ),顔真卿(Yan Zhenqing), and鄭道昭(Zheng Daozhao). In this section, we show you his Rin-sho pieces which he wrote on a folding screen while his father Tenrai was alive, and he sent to the exhibition of an acquaintance by request. And also, he wrote small pieces of one character, such as common characters ‘ 想(idea)’, ‘ 無(nothing), and unexpected ‘ 止(stop)’, ‘ 痛(pain)’ or ’ 淫(obscenity).