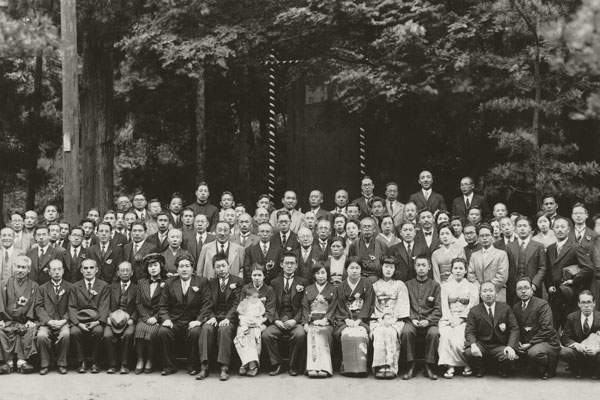 In 1929 from Hyogo, Sokyu Ueda visited Tenrai’s Kamakura-Shogakuin. Tenrai had the principle not to adopt disciples, but he accepted Sokyu as first disciple, and let him reside on Tenrai’s premise. It seemed that Tenrai needed disciples for the purpose of spreading his classical writing method. After that, from Sapporo Otei Kaneko and Suiho Kuwahara came to Tokyo, Yoyogi-Shogakuin in 1932. Then Gakyu Osawa (1890 – 1953 ) from Gunma, Yukei Teshima from Tosa came to Tokyo in 1933 and studied under Tenrai. Yoyogi-Shogakuin was a general research institute of calligraphy with Tenrai’s collections of many ink rubbings and ancient calligraphy books, and Nankoku or anyone could have access freely to it to study calligraphy.

In 1933, Shodo Geijyutusya(Calligraphy Art Group) was formed by the leadership of Sokyu Ueda to pursue various possibilities of Sho. Suiho Kuwahara, Otei Kaneko, Gakyu Osawa, Yukei Teshima, Nankoku etc. joined in it. The activities of Shodo-Geijyutusya were the source of initiative ideas to lead the contemporary calligraphy after World War II.

This photograph is the commemorative photo after the unveiling ceremony of ‘Tenrai-sensei-hi ( Master Tenrai Monument )’ erected at the Kencyoji Temple in Kamakura.

In 1945, immediately after the end of war years, Nankoku wrote the work which was apart from the characters for the first time in history of calligraphy. The work named “ SHIN-SEN-SAKUHIN-DAI-ICHI DEN-NO-VARIATION”(SPIRIT LINE 1 LIGHTNING-VARIATION) was showed the following year. This work provoked the calligraphy world to praise or censure, and created a sensation. His father, Tenrai’s leading disciples, Yukei Teshima and Gakyu Osawa encouraged Nankoku. Nankoku started to experiment in the realization of Sho- Art without the characters.

Early in 1933, Otei Kaneko announced a paper titled “ The theory of New Harmony- Style” in ‘ Sho-no- Kenkyu’( Research of Sho) by Syotei Kawatani. He proposed that we should change the expressive materials of Sho, from Chinese poetry and classical literature in traditional calligraphy to the modern literary works that anyone could read, such as works with mixed Kanji-Kana by spoken language, free verse, tanka, translated poems etc. The proposition demanded that the calligraphers should have their awareness suitable for the new era, and Sho should be the artistic expression which were open to society. In 1954, the proposition of Otei Kaneko prevailed on nationwide scale through the foundation of the modern literary works section in Mainichi Shodo-ten (Mainichi Calligraphy Exhibition).

After World War II, Tenrai’s disciples, avant-garde・Bokusyo(ink form) calligraphy ( Sokyu Ueda・Gakyu Osawa・Nankoku Hidai etc.), Shou-Sho(ink form of the character’s meaning)・one or two character’s calligraphy( Yukei Teshima), and modern literary works calligraphy ( Otei Kaneko ) leaded the calligraphic world in Japan. But Suiho Kuwahara alone adhered to Rinsho (copy and study classics ) of his teacher, Tenrai’s methodology. He was highly respected as a calligrapher who handed Tenrai’s Rinsho down faithfully. Also, for the purpose of spreading Tenrai’s teachings, he toured throughout Japan and advocated the importance of classical Rinsho, performing Rinsho in various places. Suiho Kuwahara served as the teacher of the prince Hironomiya.

After the war, in 1948 the Nitten ( Japan Fine Arts Exhibition ) set up “ No. 5 Department: Sho, and the Sho (Calligraphy) generally became accepted as as a fine art. The Sho groups ranging from the traditional calligraphic schools to the modern (avant-garde) groups participated broadly in the Nitten, in response to Syunkai Bundo’s call. The free spirit in postwar days made even the Nitten open up a door.

In 1951, Sokyu Ueda exhibited his work entitled ‘ Love ’. This work looked as though a Chinese character ‘ Hin ‘ had been written, but it expressed the form of his crawling grandchildren, he told. This work aroused controversy in the Nitten authorities, that it was unsuitable calligraphy, because of the inconsistency of the work’s title and character’s content.

Then, in 1953, the posthumous work of Gakyu Osawa which had been commissioned by the Nitten was refused to exhibit there. It is said that the work entitled ‘ Kokugaku Kokkei ’(Black mountain and black valley) was contrary to the normal sense of the Nitten management calligrapher, because ink droplets were scattered all over the background space. In 1955 Sokyu Ueda and in 1956 Sesson Uno left the Nitten , then all modern (avant-garde) groups withdrew. As a result, the No.5 Department ; Sho in the Nitten got the stronghold of the traditional calligraphic academicism.

Mainichi Calligraphy Exhibition started as well as the Nitten in 1948. Otei Kaneko and Syunkei Iijima conceived that spread of culture could be carried out through the cooperation with the mass media, considering the cultural popularization in postwar days. So they worked on Mainichi Newspaper and realized this exhibition. Mainichi Calligraphy Exhibition set up not only the traditional Chinese character , kana, and seal-engraving, but also the new genre, such as the avant-garde calligraphy, modern literary works calligraphy, one or two character calligraphy and inscribed character section.

In 1951, ‘Boku-bi ‘ ( ink- beauty) was published by the editor Shiryu Morita under Sokyu Ueda. The first issue consisted of Franz Kline’s calligraphic abstract paintings in gravures, and essays or arguments about the fusion and opposition, crossing the border between Sho and fine arts, and about the point of agreement with Zen ideas and aesthetic theory. In this magazine, the disputants of fine arts, such as Saburo Hasegawa, Kunitaro Suda of avant-garde abstract painting, and Tsutomu Ijima of aesthetics discussed in an excited tone.

In 1954, Yukei Teshima produced his work of one Chinese character; ‘ Kyo ’(Emptiness ) and started ‘ Shou-Sho ‘ (ink form of the character’s meaning) which condensed all of his emotions and thoughts into one or two characters. Yukei Teshima thought Tenrai’s ‘fu-gyo-ho’ (downward-upward-method, the old brush method) through and through and understood that an apparently flat line movement concealed the complex and subtle inflections. While he kept on writing with a brush, the twist of his wrist made his palm turn up and down. And so he tried to read the correspondence between this calligraphic method which gave changes of intensity, force, or directions to one line and the Oriental Yin-Yang thought. From his methodical exploration of Chinese classics, he interpreted that to make a calligraphic work did not writing the unit of one stroke, but made abundant ideas of one character emerge by the movement of one line.

2. Exhibition of Biennial of São Paulo 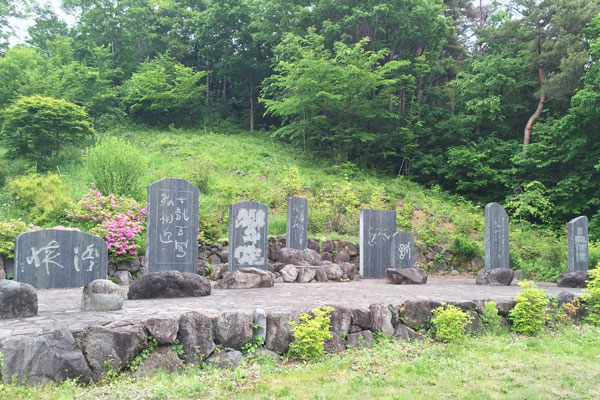 In 1957, Dr. Pedrosa, the Brazilian curator of the 4th Exhibition of Biennial of São Paulo, visited Japan to inspect Japanese contemporary arts and researched the exhibitor artists. Nankoku volunteered the guide in the area of calligraphy and made arrangements in English which he just mastered. As a result, Yukei Teshima and Yuichi Inoue were selected and requested to exhibit. At this time, Teshima exhibited the work entitled “Ho-Kai (collapse)”. When Pedrosa paid a call on him, Pedrosa asked, “ This work expresses something collapsing ? ” Teshima was surprised to hear that. Teshima was afresh convinced of the universality of Sho, because those who did not know the meaning of the Chinese character felt so by just watching it. This work presented the scene that Tokyo had been destroyed by the fires during World War II, and it was a big topic that people who gathered at the biennial felt this very image of the collapse.

Nankoku Hidai was the chosen artist of 5th Exhibition of Biennial of São Paulo (in 1959).

He exhibited five works at the Biennial among 10 works which were showed at “Domestic Show of Exhibits for Fifth Biennial of São Paulo”. The different line expression from Teshima was enjoyed by overseas people, so the line art without the meaning of the character was recognized openly. Then Nankoku’ s one-man show was held in Melbourne, Australia, and his works were selected at “Tradition and Revolution in the Japanese Art ---4 Artists Exhibition (Hakuin, Shiko Munakata, Toko Shinoda, and Nankoku Hidai) in Rijksumuseum Kröller-Müller, the Netherlands, thus Nankoku’s line art created a great sensation overseas.