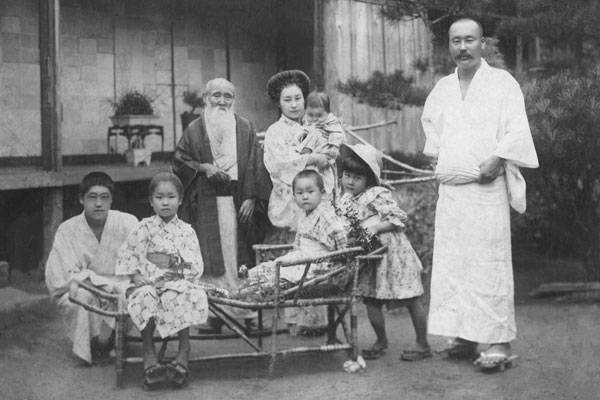 His father, Tenrai Hidai (1872-1939) devoted his entire life to calligraphy, especially to the study and interpretation of classical Chinese calligraphy and ancient brush techniques, and became known as the “father of contemporary calligraphy”. Nankoku’s mother, Shokin Hidai (1885-1948), also a calligrapher, was a master of kana, the cursive form of Japanese phonetic writing, and did extensive research on kana style of the Heian Period (794-1192 A.D.). She left her own highly individual work.

Nankoku was born into this“calligraphic" household, the fourth of seven children, the next son to the heir.

This is a picture of Tenrai and his family. The man standing at the right of the picture is Tenrai, and Shokin is at the left of Tenrai, holding Nankoku in her arms.

Nankoku’s early childhood was spent in a free atmosphere created by understanding and extraordinary parents.

In elementary school, Nankoku Hidai began painting and drawing. His teacher suggested that he enter his works in exhibitions, and their acceptance stimulated his interest in painting. 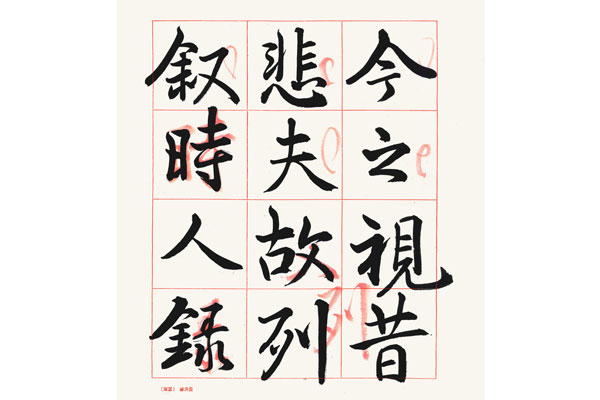 In middle school, Nankoku developed an interest in music ; he strongly attracted to classical music, ranging from Bach to Beethoven, especially committed to violin music for the string quartet.

Nankoku was also interested in calligraphy. During his second year, he began browsing through his father’s library on his own, voraciously copying at random books of classical ink rubbings. During his third and fourth years, he had free access to Shogakuin built at Yoyogi-Sanya by Tenrai, and copied many books of classical calligraphy. The copy of 竹山連句(Chikuzan couplet) by 顔真卿(Yan Xhenqing) is his work in this period.

Also during this period, Nankoku developed an obsessive interest in the violin and showed such talent that he seemed destined for his teacher’s(Hajime Uchida ) symphony orchestra. Nankoku inherited his parents’ artistic sensibility and so he was attracted by painting or music intensively, but he understood Tenrai’s maxim that an artist had to make a living from a different job in order to pursue his own art independently. Therefore he had the idea of earning a livelihood by the printing business. His nervous and introverted personality was suited for working diligently and scrupulously. 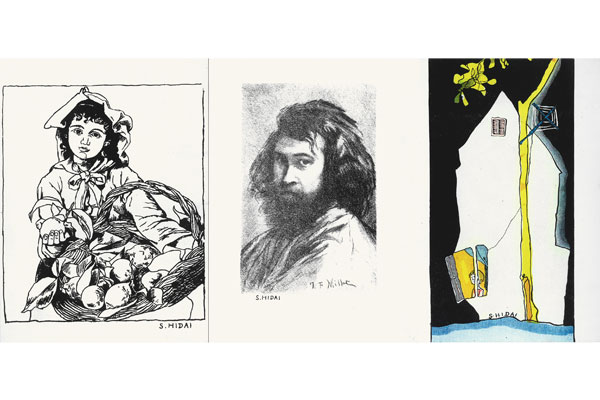 We perceive his keen sense in the practice works of printing and photography in this college, which are leading to the later works of his intellectual constructiveness and serene lyricism.