FIRST VISIT TO THE UNITED STATES OF AMERICA 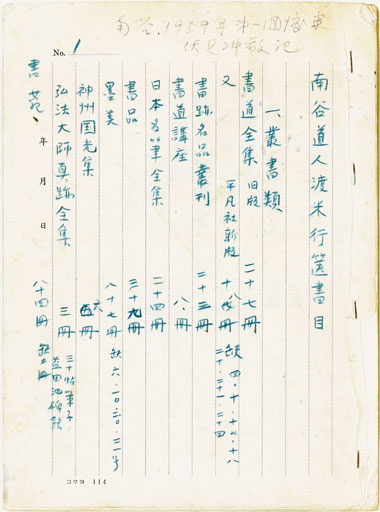 Nankoku’s understanding of Sho as the line art was disregarded and kept at a distance from the Japanese calligraphy world regarding the meaning of characters or the literary connotations. On the other hand, among avant-garde calligraphic artists born under the influence of Nankoku’s works, some inclined toward egotistic self-expression and others persisted with mechanical and superficial space-decoration, and they got into the rut.

In 1959, Nankoku was the chosen artist of 5th Exhibition of Biennial of São Paulo . Then Nankoku’ s one-man show was held in Melbourne, Australia, and his works were selected at ‘Four-man show, “Traditie en Vernieuwing in de Japanese Kunst" (Tradition and Revolution in the Japanese Art , Hakuin, Shiko Munakata, Toko Shinoda, and Nankoku Hidai) in Rijksumuseum Kröller-Müller, the Netherlands, thus Nankoku’s line art created a great sensation overseas. And so, Nankoku decided to confirm the universality of the line art in the United States of America, where was at the center of innovative art activities.

In America after World War II, Abstract Expressionism and Action Painting became the focus of public attention. The former produced the paintings feeling dynamic movements without any representational expression, and the latter attached importance to the painting action itself resulting from the creative impulse of the inner side.

Nankoku was convinced that the possibilities of new art belonged in the line’s power of expression. He learned eagerly English conversation in his mid-forties and mastered it, with preparations for his activities in America. He planned to publish the English book about the appreciation of classical calligraphy and the history of calligraphy, in order to correct the misunderstood essence of Sho-Art in the West. The book was entitled The Art of Far Eastern Calligraphy and he completed manuscript for Chugoku Shodoshi Jiten (A Dictionary for History of Chinese Calligraphy) in collaboration with Chukei Fushimi, scholar of Chinese calligraphy, and also completed much of the English translation with the assistance of Mrs. Elise Grilli, reporter for Japan Times, and scholar and critic of Japanese art.

On November in 1959, Nankoku first visited to the U.S. at invitation of Rudolph Schaeffer School of Design in San Francisco, with a thousand ancient calligraphic books and dozens of rubbings. There he taught calligraphy techniques and history at the school, and also held classes in his studio. During his one year and six months’ stay, he held exhibitions of one-man-show, twice in San Francisco and twice in New York, and they became hot topics. Some exhibited works were purchased by the New York Museum of Modern Art (MOMA), and also purchased by more than one notable persons.

Nankoku was much pleased that Americans who did not know the meaning of the Kanji (character) could grasp the Sho as the line-art and developed their honest expressions of line.