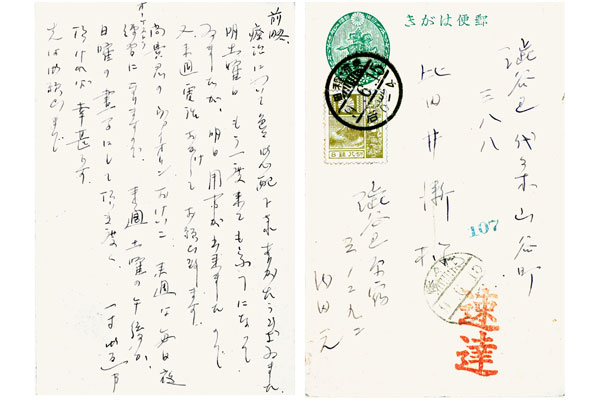 Nankoku entered Tokyo Koto Kogei Gakko (Tokyo Technological College, now Chiba University) to specialize in printing and phototype process, and at the same time he developed an obsessive interest in the violin. He learned to play the violin under Hajime Uchida, and showed such talent that he was regarded as a member of his teacher’s symphony orchestra. However, he abandoned the way of musician with the intension of his father Tenrai.

On the left, the postcard from Hajime Uchida to Nankoku.

Nankoku asserted that the essence of the art of calligraphy was the line expression which depended on a disciplined brush-stroke, therefore this essence was liberated from the meaning of the letter or from the literary profundity. One of grounds for this assertion is his comprehension of the art of music. For example, in lied the contents of poetry are closely related to music, but for all that the innate beauty of music does not express the feeling of pleasure or sorrow, according to Hanslick’s music theory that the innate beauty of music is different from the literary factors attendant on music. 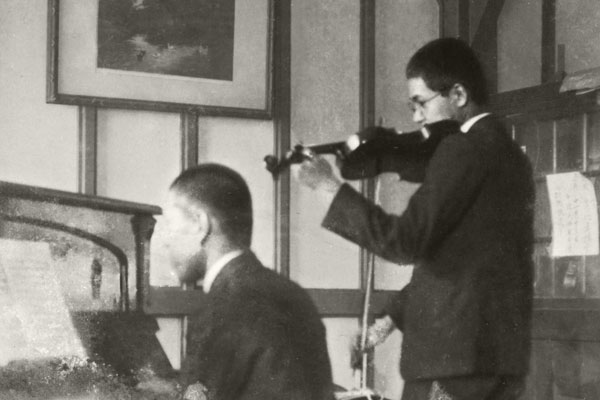 “On Musical Beauty”（Vom Musikalisch-Schönen ）by Eduard Hanslick（1825 – 1904）
was published in 1854, 19th century. All that time the Late-romanticism was at the height of its popularity, and its typical examples were Richard Wagner’s or Franz von List’s works. The Late-romanticism’s music was characterized by treating music as a medium of expressing emotions; moreover its music granted to give the literary expressions to itself. On the contrary, Hanslick emphasized the independence of art of music on account of its purity. Up to that time, the musical aesthetics did not set up criteria for the musical beauty at all, and only praised the musical power of expressing emotions by which the listener would be overwhelmed.

On the other hand, Hanslick advocated the beauty peculiar to music. Music is quite independent by itself in case of composing its beauty, so the inserted contents from outside are quite needless. Its beauty belongs only in the artistic combination of sounds, and sounds manifest themselves in the unrestricted shapes to listeners’ spirits. The expression of musical beauty is composed by sound-constituents such as melody, harmony and rhythm, so the musical beauty is the independent beauty which aims at the realization of beauty itself. Hanslick defined the music contents based on its pure forms as “ sounding movement forms”.

In Sho, the line is not immediately subordinate to the meaning of written letters or the literary contents, either. And also the line is not the expression of the writer’s emotion which he commits to the letter. The beauty of Sho belongs in line’s form such as its qualities, slow or fast line, curve or straight line, wet or dry line, strong or weak line etc., and the line’s form manifests itself as beauty of Sho. Its beauty flows from the variations of the writer’s personality stroking the brush, and the line expresses his inner being. The line expression of Sho does not show the writer’s emotions as well as music. Nankoku conceived that Sho did not expressed the human emotion, but the distinct thing, that is human personality, in other words, a person.

For example, in「喪乱帖」(Sangluantie), 王羲之(Wang Xizhi) wrote the sad incident that his family grave was dug up, but the feeling of sadness is not manifested in its Sho; from 「喪乱帖」a human being; a person named王羲之(Wang Hsi-chih’) emerges. Nankoku declared that art had to express the person ultimately.