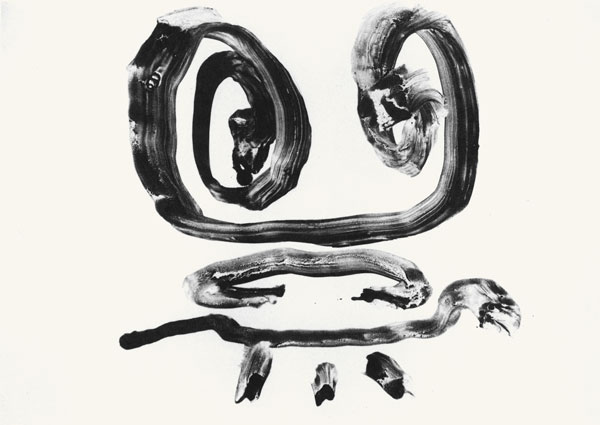 Nankoku tried new technical process with the mysterious ink in his one-man show at Okura Gallery, 1967. He pasted torinoko paper on plywood, making the ground by coating it with acrylic gesso, and finally applying several layers of tinted acrylic over the paper. On top of this, he wrote with the old Chinese mysterious ink. The works by this method were indestructible and water-resistance. At the opening party, he used one such work as a table top. He showed that the soiled work with spilled drinks was not damaged and cleaned off by wiping with cleanser.

Nankoku’s work style also changed; around among the first to the third visit to the U.S., his works shifted from the powerfulness and profundity of the line expression to the unpretentious, free, simple but elegant line. A certain work showed full of humor. We can perceive that Nankoku’s humanity had matured greatly from experiences in the U.S.

Nankoku exhibited his work at “Fine Arts Exhibition Expo 70: Discovery of Harmony,“ in Osaka Expo Museum of Fine Arts, and after then, his works were increasingly unrestricted and some were composed of a few small dots and lines or some were made full use of open space (yohaku ). These works appeared the art with the essential nature of a person, Nankoku Hidai, free from the stereotyped framework of calligraphy or painting.

In August of 1985, he was struck down by cerebral infarction and hospitalized. He had left unilateral spatial neglect symptoms which made him lose left-half of the field of view, but as a result of hard rehabilitation, he could almost get along in his daily life.

In 1987, he held 14th one-man-show in Tokyo, and also published a long wished Chugoku Shodoshi Jiten (A Dictionary for History of Chinese Calligraphy), by Yuzankaku Publications. Moreover, he published a volume of works selected by the author, Hidai Nankoku Sakuhinsyu (Shogakuin Publications).