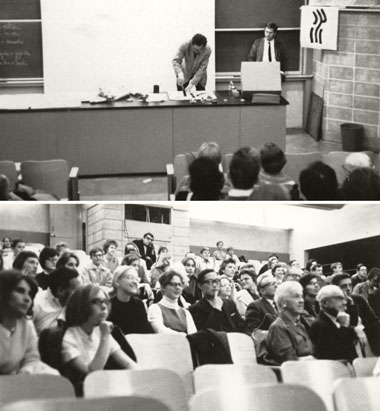 In autum of 1963, Nankoku visited to the U.S. for the second time, for the purpose of his one-mam-show at Mi Chou Gallery in New York. According to the experiences last time, he toured various places in America to lecture the history of calligraphy, reflecting that the knowledge of the history of calligraphy was indispensable for the correct understanding pf Sho. Nankoku wrote a draft of the lecture in English and completed it with the assistance from Mr. Ned Ouyang, owner of Mi Chou Gallery. Around the New York area, he lectured at College of Rutgers University, Lehigh University, Columbia University, Brooklyn College, Sarah Lawrence Women’s College, and in Washington, D.C. at Maryland Institute, six times in all and besides at Asia House of Japan Society in New York City. Ad Reinhardt in Brooklyn College praised in the letter of thanks, "most exciting acts which were taken place during the dozen years past at the College, " and the letter from Lehigh University told, “ many students were excited passionately by your performance”.