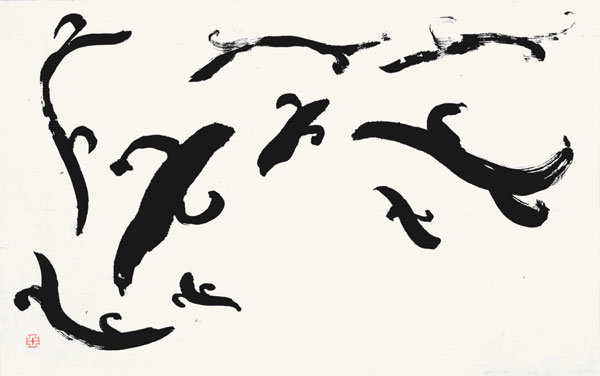 In 1945, immediately after the end of war years, Nankoku Hidai wrote the work which was apart from the characters for the first time in history of calligraphy. The following year, he showed it at “Gendai Bijutsukyokai-ten” ( Modern Fine Art Association Exhibition) on the advice of his brother-in-law Hiroshi Kado. The work named “ SHIN- SEN-SAKUHIN-DAI-ICHI DEN-NO-VARIATION”(SPIRIT LINE 1 LIGHTNING- VARIATION) provoked the calligraphy world to praise or censure, and created a sensation. His father, Tenrai’s leading disciples, Yukei Teshima and Gakyu Osawa encouraged Nankoku. Nankoku started to experiment in the realization of Sho-Art without the characters.

Nankoku’s recollection; ‘ Until the birth of Spirit Line ‘ (1955) ‘”After the evacuation, I used to sit at the kotatsu, improvising strange lines and dots and making mountains of waste papers. If people came, I suffered from such lack of confidence that I would quickly hide what I was doing. This continued for some time, until I suddenly remembered my father’s admonition, ‘If you come to an impasse, return to the archaic(or origin),’ I remembered ‘ku-wen’ (archaic script) and leafing through the Ku-chou Hui-pien, a dictionary of Ku-wen. The character ‘den’ (‘tien’ in Chinese, lightning ) attracted me in a curious way and I began working it. The result was Spirit Line Work No. 1, which turned out to be variations on ‘den’.”