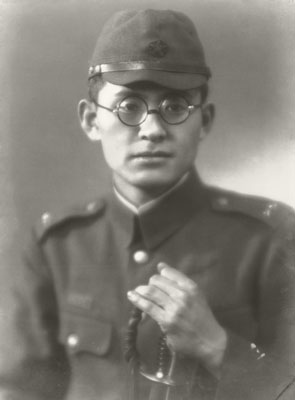 In 1934, after graduating from Tokyo Koto Kogei Gakko (Tokyo Technological College, now Chiba University) , Nankoku took a job with the Land Survey Department of the Army’s Ceneral Staff Office Of Japan(currently renamed as Kokudo-Chri-In) at Miyakezaka. He studied land surveying and map making techniques there, then served as engineer and teacher of Education Division and taught surveying technology to his juniors.

In 1935, his elder brother Atsushi died, who had been working in NHK, and had been expected to succeed to Tenrai’s tasks such as the management of Shogakuin. That became the duty of Nankoku.

In 1939, his father Tenrai died, so Nankoku succeeded to the directorship of Shogakuin and he was engaged in the management of Tenrai’s collection of rubbings, ancient Chinese calligraphy books, etc. He continued to publish Journal “Sho-Sei (calligraphic force) and ancient Chinese books; he promoted the spread of classical calligraphy.

Then the war became increasingly harsh and the oppressive ways of the world swelled gradually. Nankoku’s colleagues and students of the Land Survey Department proceeded to the battle front one after another, and the military mails from the battlefield were reached after the censorship. Soon, more and more the war situation was growing strained and Nankoku felt into the depressive feelings that he could not forsee circumstances. In 1945 the air raid intensified and Land Survey Department of the Army’s General Staff Office at Miyakezaka was destroyed by fire on May 25. Immediately after the war, Nankoku was evacuated to Nagano Prefecture. Warming himself at the kotatsu in the evacuation place, Nankoku inquired of himself how the future of Japan would go after the defeat, and wondered whether calligraphy could be significant for its future, depending on the peculiarity of the Orient. His distress was almost unbearable in the situation with no obvious solution. And Nankoku found the answer; Shin-Sen (Spirit Line).