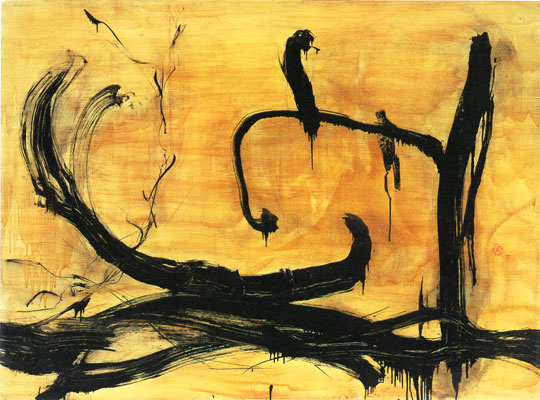 There were many responses to Nankoku’s experiments of Sho which were apart from the characters. Calligraphers gathered and followed him, some named themselves ‘avant-garde calligrapher’, and some named ‘ink form calligrapher’. Nankoku firmly believed that ‘ spirit line’, namely the line expression was the core in Sho, and consciously started a variety of experiments how the spirit and beauty of line could be expressed, and how the spirit of Sho should be expressed apart from the meaning of characters or the feature of letters. He alone began to struggle his way for himself.

In 1954, an art critic maintained that ‘the only point of difference conceivable between abstract painting and abstract calligraphy (bokusho or ink form) is that of materials.’ In opposition to his opinion, Nankoku argued that ‘the essence of the art of calligraphy is the expression which depends on a disciplined stroke regardless of the medium.’ Nankoku therefore chose oils on canvas to demonstrate the validity of his argument and pursued the possibility of line expression by trying various materials, such as lacquer board works, works by way of scratching the oil-painted board with a piece of bamboo or tires, without stroking ink brush.