In January 1965, during Nankoku’s one-man show at the Me Chew (Mi Chou) Gallery in New York, Elise Grilli introduced this one-man show and wrote an article. This article appeared on the New York Times and received a great response. The New York Times Sunday, January 31, 1965 * Click on the image of
* Click on the image of the newspaper to view in it as a PDF.

In January 1965, during Nankoku’s one-man show at the Me Chew (Mi Chou) Gallery in New York, Elise Grilli introduced this one-man show and wrote an article. This article appeared on the New York Times and received a great response.

* Click on the image of the newspaper to view in it as a PDF. 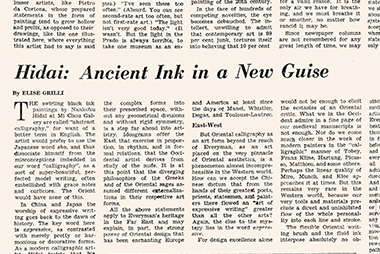 The following is the excerpt from this article.

Hidai: Ancient Ink in a New Guise  By ElISE GRILLI

The swirling black ink paintings by Nankoku Hidai at Mi Chou Gallery are called "abstract calligraphy," for want of a better term in English. The artist would prefer to use the Japanese word sho, and thus dissociate himself from the misconceptions imbedded in our word "calligraphy", as a sort of super-beautiful, perfected model writing, often embellished with grace notes and curlicues. The Orient would have none of this.
In China and Japan the worship of expressive writing goes back to the dawn of history. The key word here is expressive, as contrasted with merely pretty or harmonious or decorative forms. As a modern calligraphic artist, Hidai insists that his abstract forms derive from his apprenticeship in a long stream of historical theory and practice and that his work cannot be fully evaluated from a sheerly pictorial or plastic standpoint. Hence we must dip back into an Oriental lore of some 4,000 years' development, in order to approach Hidai, the founder of the most modern "abstract calligraphy" in Japan.
(omission)

Nankoku Hidai is the son of a famous traditional calligrapher of the past generation. He inherited his father's lore, as well as his treasures of ancient inks, rubbings, books, seals, and other materials. The father had watched the new deviations that were shifting the course of a very ancient art and he had not objected at all, since he wanted this art to remain close to life and to the pulse of today. Actually, every stroke in the modern calligrapher's images can be derived from his formal training in the ancient tradition. Only the literary associations have been peeled away, leaving the expressive line to stand revealed in its naked purity.
The work of Hidai is strong enough to withstand the scrutiny of the "innocent eye" of an Occidental critic who is not deeply versed in the historical background and who seeks mainly for plastic values. For full understanding, history and practice with the brush may add a larger dimension, but Hidai himself thinks that a sensitive Westerner has almost an advantage in a more direct approach to the heart of the design.

Elise Grilli has been resident in Japan since 1947 and is active in Tokyo as professor of Oriental art history, as well as critic for the Japan Times.