Founding “The Japan Association of Avant-garde Calligraphers” in 1957（１）

On August 15 in 1945, Japan lost a long and disastrous war and people were shrouded in confusion and uncertain anxiety. Among them, some people emancipated themselves from the traditional values and fettered ideas, and projected new activities in search for freedom.
In the world of calligraphy, some calligraphers cast away the conservative and feudal constitution and view of spirit cultivation owing to the conventional nature of calligraphy in Japan, and they endeavored to regenerate calligraphy as free artistic creation.  They continued free activities while being criticized and denounced from the conservative traditionalists as their works were not “calligraphy” at all, nevertheless they kept their free creativity with pride in "Avant-garde". More than 10 years after the war, they linked with each other as "avant-garde calligrapher" and aimed to develop the art of calligraphy.

In 1948, “the 5th Category  Calligraphy” was opened at the Japan Fine Art Exhibition, and calligraphers of a wide range from traditional to modern (avant-garde) participated in the Exhibition in response to the call of Shunkai Bundo. Sokyu Ueda exhibited a two-piece folding screen titled "Love" at the exhibition in 1951. It is said that this work is a figurative expression of his grandchild who creeps, although this work looks like the character "品". This work aroused much controversy as an unfavorable calligraphic work by the Exhibition authorities, because the title and the content were mismatched. In 1953, Gakyu Osawa's posthumous work "Kokugaku Kokkei ( Black mountain Black valley)“ (commissioned work) was rejected from display.  It is said that the splashes of ink scattered all over the background space violated the norm of calligraphy which the Exhibition management artists held.  Sokyu Ueda and Sesson Uno left the Japan Fine Art Exhibition in 1955, and all modern calligraphers withdrew from there, and so the 5th Category of the Japan Fine Art Exhibition became a stronghold of traditional academism. 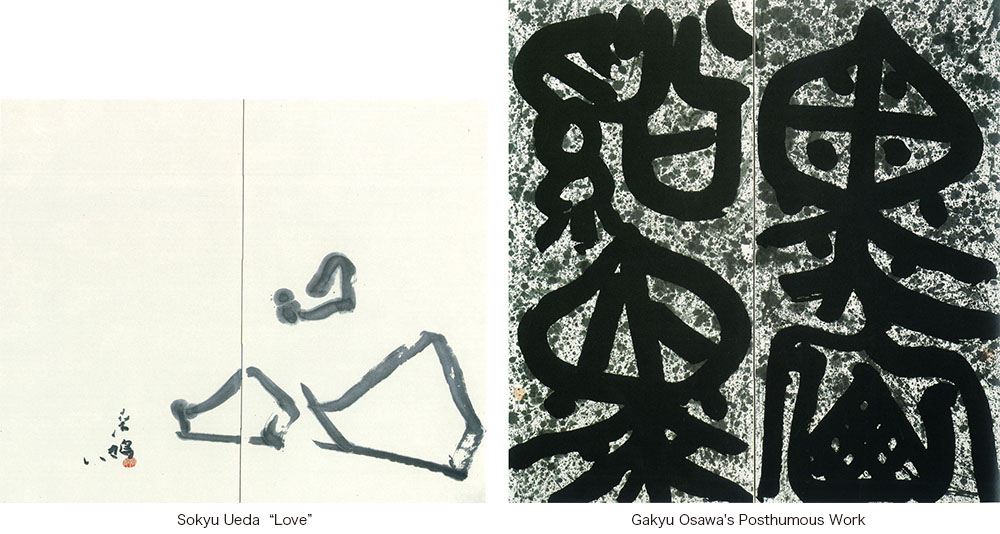 In 1952 Shiryu Morita formed "Bokujin-kai (Sumi-ink Artist Association)” in Kyoto, together with Yuichi Inoue, Sogen Eguchi, Yoshimichi Sekiya, and Bokushi Nakamura. "Bokujin-kai” was formed in order to aim for the new avant-garde-oriented art. It was intended that their art should cross the border between calligraphy and fine art, creating images which could be placed neither in the character nor in the painting.
Under the support of painter Saburo Hasegawa who had been a champion of abstract art since the prewar days, Shinichi Hisamatsu researching into Zen thought at Kyoto University, and Tsutomu Ijima specializing in aesthetics, he sought a new direction in calligraphic art.
“Bokubi (Beauty of Sumi-ink)”, the magazine edited by Shiryu Morita, often featured abstract artists in Western Europe. Franz Klein, Pierre Alechinsky, Pierre Soulages, and Mark Tobey were typical. Shiryu Morita and Yuichi Inoue formed a friendship with these abstract artists and became famous internationally and so actively entered overseas exhibitions. "Avant-garde calligraphy" became a worldwide boom, and it was variously called "Boku-sho ( Sumi Forms)" or “ New Calligraphy” 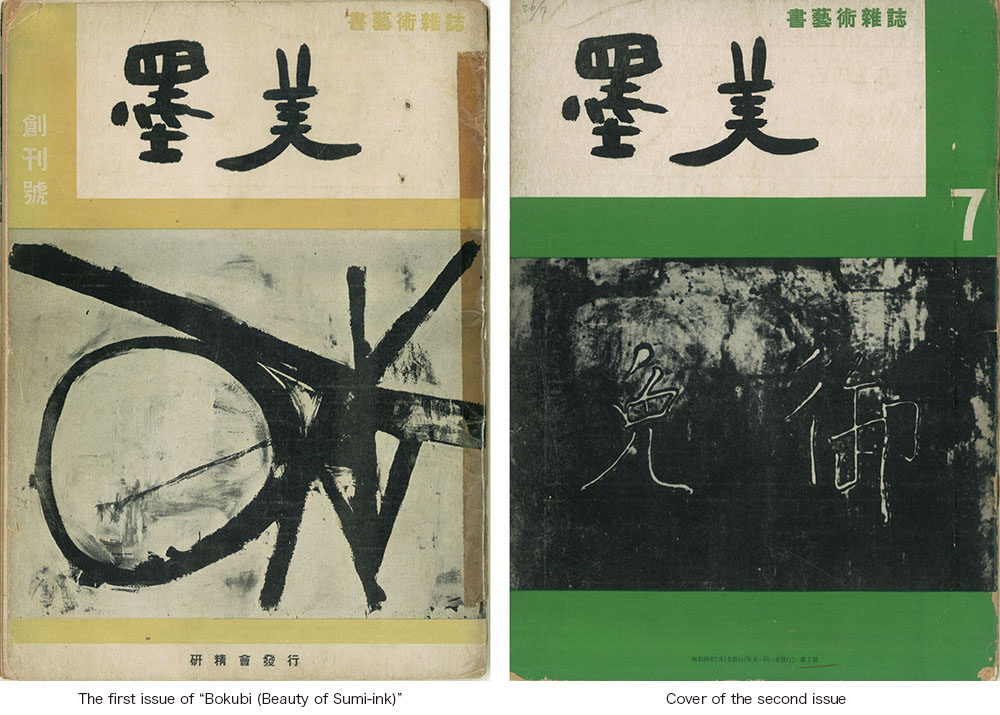 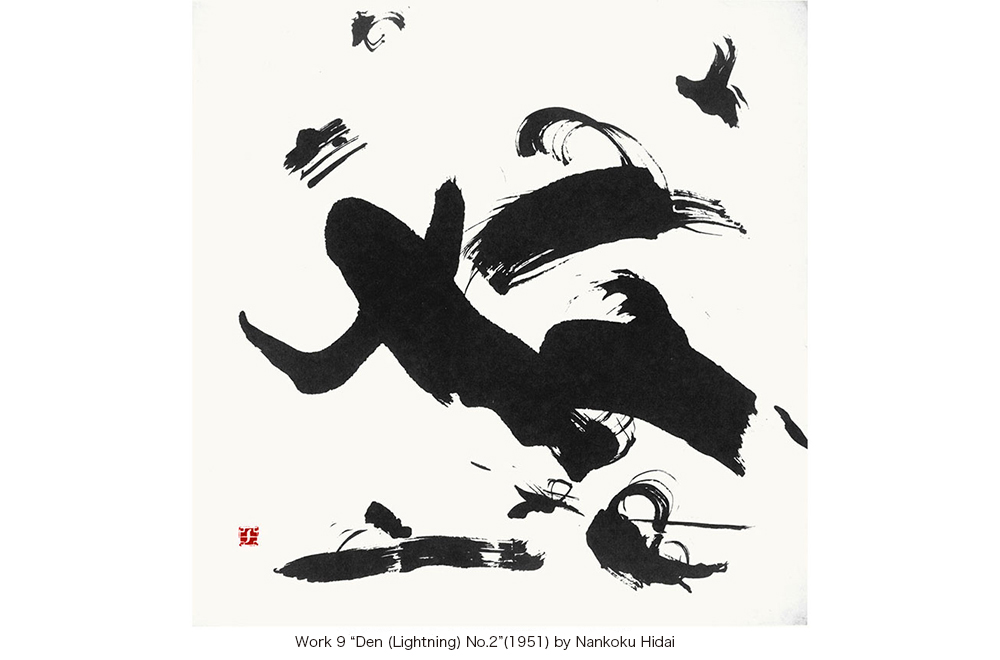 *Nankoku Hidai was the son of Tenrai Hidai, who had played an influential role in the world of calligraphy  during the Meiji and Taisyo era. Contrary to his father's classical calligraphy, he was active as a champion of the world of current avant-garde calligraphy .

At my one-man show held in February, not only the world of calligraphy but also people related to pictures in particular showed great interest, and I am very grateful for their kind and sharp criticisms. At that time, they asked me the biggest question what was the avant-garde calligraphy and whether an ink form was a picture or a calligraphy, and I was compelled to reflect on the fundamental problem of what was  calligraphy .
I think some people tend to take calligraphy as spirit cultivation or something mysterious. In other words, they are apt to understand calligraphy as a the improvising expression of personality rather than the fine art, and to imagine it as something hobby that denies disciplined technique.
Naturally, because calligraphy is an art, it has the major problem of human content. However, as calligrapher, I think that the personality appears in producing activity through the refinement of such a technique by devising how to use brush and how to compose the structure of works , thinking about the subject matter, researching the ancient calligraphic book, and cultivating the brush power. I believe that valuable works are born where deep human content merges with high techniques.
Of course, those who are prepossessed by the method and addicted to the trivial technique should be deeply ashamed of themselves in front of the calligraphy of high priests and great persons. But I think that it is very important to think why Jiun (慈雲) used a straw brush to obtain the great skill of the brush, and why the master of calligraphy, 顔真卿 (Yan Xhenqing) was at great pains to know how to use the brush of 張旭 (Zhang Xu).
Moreover, the avant-garde calligraphy has been regarded as synonymous with ink form, but I take it for granted that the recently developed “modern literary work” --- the meaning of calligraphy based on literature that is easy to be understood by modern people --- is one of avant-garde calligraphy. The conventional calligraphy has been connected with literary elements and developed itself, and so I think that the movement of “modern literary work” which tries to tie with spoken language, free verse, tanka, translated poems etc. of modern age from a new angle should be valued together with 'ink form'.  It is desirable to pick out this genre, just as new activities of vocal music and opera have been carried out in the field of music.
You know, My father Tenrai dedicated his life to the development of calligraphy in the Meiji and Taisyo era. He insisted that calligraphy was art, and with emphasizing spiritual content of calligraphy himself, he directed all his energies to the study of ancient calligraphic books and the discovery of new writing methods, and worked hard to lay the foundation of calligraphy . He is considered to have played the important role in the development of today's calligraphic art and the development of calligraphic education.
I will keep this point in mind, so I beg both Sokyu Ueda (ink form) and Otei Kanako (modern literary work) for the supporting exhibits , who have inherited Tenrai’s ideals as the very leading disciples and have been developing the avant-garde calligraphy brilliantly. We will provide you with the traces of our studies, and we will receive your frank criticism and direction, and at the same time, we will hope to be taught various fundamental problems of calligraphy.
As I made some remarks above, the avant-garde calligraphy was born, and at the present time when calligraphy got the opportunity to penetrate into the field of art widely, we want to think over calligraphy, reflect on it, and not to apologize for its direction.

In March, 1957   The 2nd Avant-Garde Calligraphy Exhibition in Memory of Tenrai Hidai

It is said that the germ of the avant-garde calligraphy belonged in the advanced artistic spirit of Tenrai. Last year, when avant-garde calligraphy began to have deep relationship not only with the world of calligraphy but also particularly with Japanese abstract art, we held the 1st Avant-Garde Calligraphy Exhibition in Memory of Tenrai Hidai. At that time, we begged Tenrai’s disciples, Sokyu Ueda and Otei Kaneko for the supporting exhibits , and offered our works to be appreciated.  We are grateful not only to calligraphers but also to  painting-related people, poets and many others that we could have the full and very useful opportunity to illuminate and reconsider the fundamental problems of “Ink forms”, “modern literary work”, or “Tenrai’s lines” etc.
We decided to hold the second exhibition, but this time on more than half a wall we put the invited exhibits of six calligraphers who are most closely related to Tenrai and have been active at the forefront of avant-garde calligraphy from the first. All of them are currently in representative positions of each avant-garde organization, and have pushed forward with the creation of new calligraphy. Until now, there were few opportunities to be exhibited together due to the circumstances of the world of calligraphy, but this time, with the advantage of being related to Tenrai, everyone was willing to agree to this plan, and they will exhibit mostly new works. This exhibition is, so to speak, expected to represent the high level that shows the characteristics of every trend in contemporary avant-garde calligraphy. So, I am greatly delighted to hold this exhibition. I'll wait for you to appreciate the exhibition.

Immediately after the 2nd Avant-Garde Calligraphy Exhibition in March 1957, there was a growing tendency to establish “The Japan Association of Avant-garde Calligraphers”.

In August, 1957  The Establishment of The Japan Association of Avant-garde Calligraphers

Purpose of the Establishment

Prospectus of the Association in May, 1957

A decade has already passed since progressive movements in calligraphy, so-called avant-garde calligraphy,   started. During that times, many avant-garde calligraphers were confronted with the deep-rooted old customs of the world of calligraphy in the turbulent social situations. But many calligraphers have also continued extremely fulfilling activities in producing, developing, and introducing calligraphic works.    Until now, we are at the stage where new areas are opened up not only in Japan but also in foreign countries. These areas have not yet been seen in the world of calligraphy.
However, on deep reflection, we must fundamentally solve the various important problems which are inherent in the avant-garde calligraphy itself, and we must actively find a way out of many difficult problems which are lying in the progressive movements and also outside, so the course with further hardships is only foreseen in the future.
In view of such internal and external circumstances, there has been the growing need for the realization of the organization to build a new mutual relationship in the isolated and divided situations. Therefore we have consulted with each other and we are going to propose the establishment of “the Japan Association of Avant-garde Calligraphers”, because this Association mainly aims at mutual communication and benefit protection as showing in the attached paper ; ‘rules and regulations’ (draft) and also it aims at promoting the further active development of the progressive movements.
I would like you to make your best efforts as a member of the Association at this time, and I would like you to consent to the establishment after understanding its foregoing purpose.