In March 1963, according to the letter from Mi Chou Gallery in New York, many citizens were looking forward seeing Nankoku’s new works, so Nankoku became increasingly willing to visit to the United States again.

In late September 1963, Nankoku decided to fly out to New York for his second one-man show at Mi-Chou Gallery. He arrived in New York on September 25 via San Francisco. He stayed at the Chelsea Hotel on West 23rd Street 222, between 7th and 8th Avenue in Manhattan's Chelsea district. The Chelsea Hotel was a legendary hotel where famous artists, writers and musicians stayed (＊1). 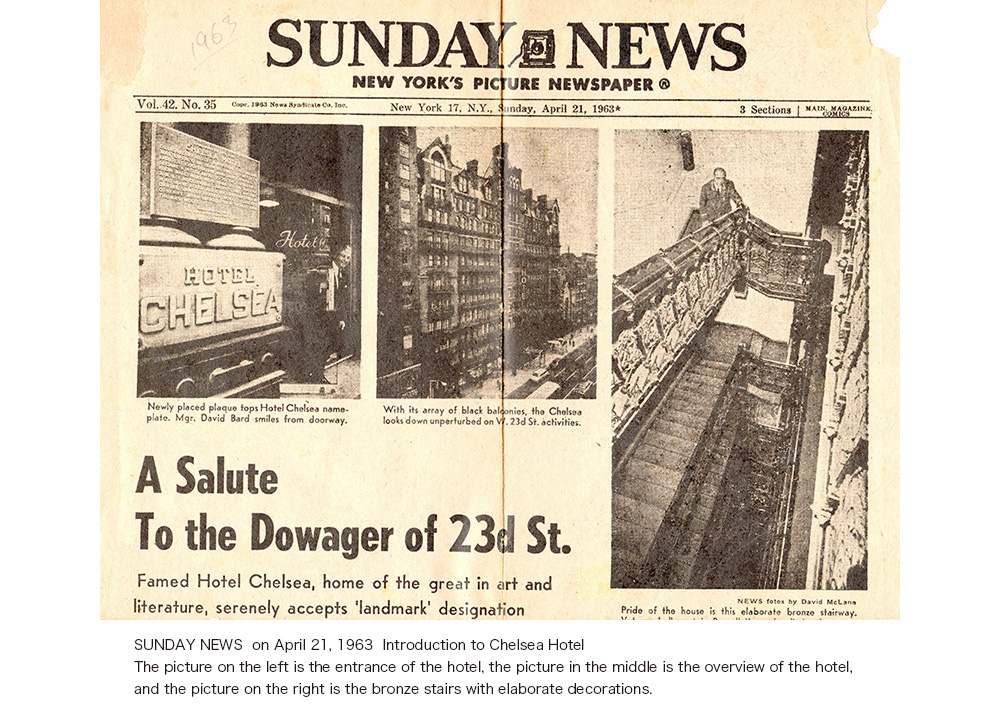 Nankoku was absorbed in preparation for his one-man show at the Mi Chou Gallery from October 2 to 26, and did not contacted any of his friends there. He informed only Mr. Overton and Mr. Inoue, presidents of the Japan Society Association, that he had arrived and scheduled to hold a one-man show.

His second one-man show at Mi Chou Gallery was highly evaluated. Nankoku’s works reversed themselves from his preceding works with lyric tone to confident works with bold and powerful lines and strong constructive power, using "mysterious ink" that brought about strange workings. From 1961, he adopted a kind of writing order of Chinese character in the traditional calligraphy. There was a writing order, but it was not a character. It could be said that he pursued the essence of calligraphy which did not write the character. 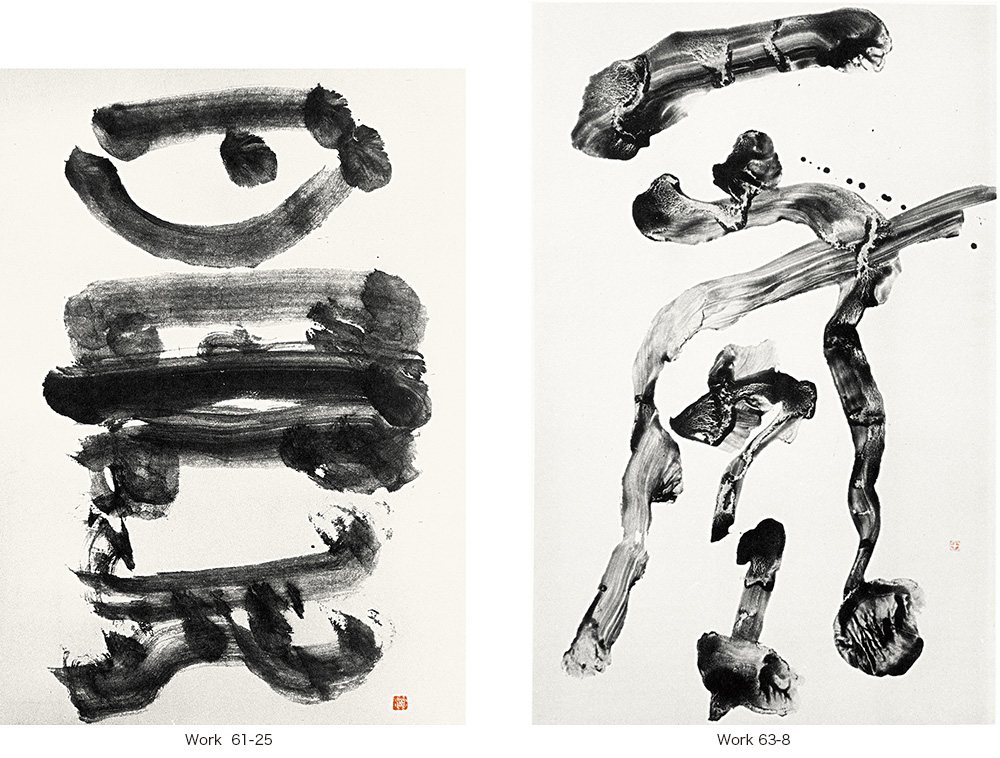 Through the intermediation of Elise Grilli, he also exhibited his works in " Modern Japanese Calligraphic Painting " (Touring exhibition in Melbourne and eight other cities , such as Australian Museum of Modern Art and Design of Australia, Perth, Canberra and Sydney) from November 6 to November 28, and Nankoku's works were accepted and appreciated as creation of progressive art overseas.

Another purpose of Nankoku's return to the United States was to give Westerners the correct understanding of calligraphy that was the original art of the East.

After experiencing two World Wars, the value of traditional culture collapsed in the West, and anxiety and emptiness prevailed broadly. Because Westerners were fascinated by the different Eastern religious ideas from the West in search of support of the heart, “Zen” boomed in Europe and the U. S. The thought of “Zen” based on pure experience beyond the dualistic opposition of Subject--Object (or before its opposition) was easily connected with the current of thought, such as the automatic description of Surrealism and the Act that the artist was painting were certainly the definite artistic creation (action painting), as means of breakthrough the dead end of the dualistic thought which had fallen into the opposition and the division. Oriental calligraphy also had a side that had been highly thought by such a Zen boom. Ink is put on the brush, and the brush is unconsciously wielded around and the ink is blown off. The brush itself moves innocently, then the work of calligraphy is written. I won’t write the calligraphy but I unite with the brush, and the brush itself writes the calligraphy, and so the wonderful calligraphy is born. Such unconscious ink- traces represent my existence. The grasp of calligraphy that had been stirred up by this Zen boom, caused a misunderstanding about the calligraphy exceedingly.

After his one-man show, Nankoku gave lectures on the history of calligraphy at universities around New York by introduction of the Japan Society or at the instance of the university itself.

The first lecture was held at the Department of Art in College attached Rutgers, the State University of New Jersey in New Brunswick, New Jersey (＊2) at the end of October. During the lecture from 3:00 p.m., he talked about the history of calligraphy fluently, but in the middle of talking the dinner bell (5:00 p.m.) rang , and a professor of the university regretfully told Nankoku, "Students will not be able to eat dinner if they are late for meal time". He learned instruction from this bitter experience, so the next time he decided to cut until the Tang dynasty in the history of Chinese calligraphy and to limit to about 30 slides along with Japanese calligraphy.

The second lecture was held on November 3 at Lehigh University in Bethlehem, Pennsylvania (＊3), from 8 p.m. after dinner. The audience consisted of not only faculty members and students but also lovers of art because of calling to all citizens by broadcast. The lecture began with a question-and-answer session between the audience and Ned Ouyang from Mi Chou Gallery, Nankoku. After unexpected questions and false preconceptions about calligraphy were expressed, 8 mm films projecting the writing scene of Japanese calligraphers (Sokyu Ueda, Yukei Tejima, Suiho Kuwahara, Yasushi Nishikawa, Tsuneko Kumagai, and others.) and slides were showed. They had been filmed and made by Nankoku before returning to the U.S. (published on "Calligraphy, Masters of the 20th Century") and in this way Nankoku would try to explain the accurate history of calligraphy in China and Japan. The lecture ended in two hours, but the enthusiastic audience remained and asked various questions until midnight.  The lectures from 3rd day to 5th day were a great success and he received a letter of thanks from Francis Quirk, chief professor of the Department of fine arts.

The third lecture was held on November 15 in a classroom of the department of fine arts at Brooklyn College of the City University of New York (＊4). Surrounded by more than 100 painting students, Nankoku didn’t make use of the manuscript for lecture but discussed many questions friendly with enthusiastic young people who were aiming for art. It was an unforgettable time for Nankoku. Ad Reinhardt, chief professor of fine arts with a reputation as an abstract painter, wrote in a letter of appreciation and praise : "You were a great success at Brooklyn College. Your program was the most stimulating event we’ve had at the college for over ten years and the students will be talking about it for a long time ," (introduced in The Nankoku Report Vol.8, Friday, November 22, 1963).

For the fourth time, the following afternoon (on November 16), he gave a lecture at Kent Hall of Columbia University in the City of New York (＊5) in Manhattan, New York. It was lecture for faculty members and students of the Faculty of Chinese and Japanese Studies. They had abundant knowledge about the calligraphy and painting of Ming and Qing dynasty, but they were almost ignorant about the classical calligraphy from Han to Tang dynasty. In addition, the method of calligraphic training was not introduced at all, such as the classical brush strokes studied in Japan and the awakening of calligraphy as art. Nankoku emphasized that calligraphy was one of the basic tones of Oriental culture and was deep-rooted in people's lives. In addition to the previous films and slides, a recording film of the “A Class on Calligraphy for Westerners” at ‘The International House of Japan’ was also screened. Professor Donald Lawrence Keene, Japanese literature researcher, saw this film and said in the closing address that he had been deeply impressed to find out that Westerners could write great works of calligraphy.

John Fitzgerald Kennedy, the 35th President of the United States, was sniped and killed in Dallas, Texas, on November 22. Then Nankoku was staying at the Chelsea Hotel to prepare for his next lecture. The shock ran all over the U.S., and people were shrouded in confusion and sorrow. Nankoku spent several days sticking close to the radio to learn more about the incident. The man, who was believed to be a sniper, was shot dead by a citizen in the aisle of the Dallas Police Department. Kennedy's funeral had Nankoku's planned lecture in the Japan Society postpone for a week, which was held on December 1 (Nankoku Report Vol.8  On Friday, November 22, 1963,  Nankoku's conditions were introduced).

On December 5, he gave a lecture at the research institute in the University of Maryland (founded in 1856.) in Washington, D.C. (＊6), and in mid-December, at Sarah Lawrence College in Westchester County, New York（＊７ in those days, a women’s college）.

During his second visit to the U.S., Nankoku had been invited to a one-man show in Europe by Mrs. Irmtraud Schaarschmidt-Richter in West Germany, and had received an invitation to Italy by his friend, Nobuya Abe (＊ 8), also had been keeping a friendship with Tapié in France, and moreover through the introduction from Victor Pasmore (＊ 9), old British painter, Nankoku took a step to expand the stage of his activities from the United States to Europe. 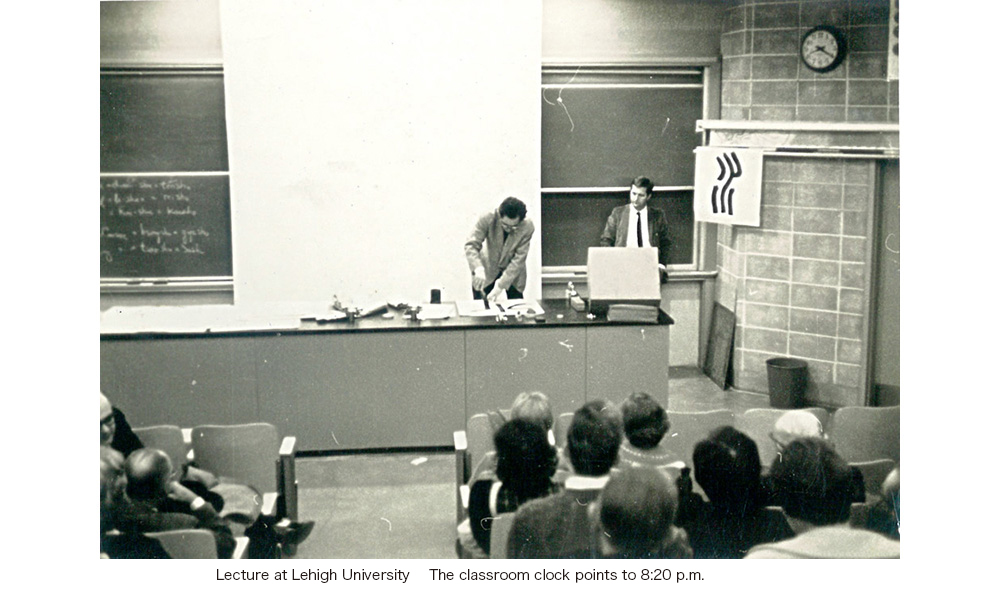 ＊1   Chelsea Hotel:
Founded in 1883. It was known as a hotel for long-term visitors of writers and artists. Mark Twain, O. Henry, Dylan Thomas, Thomas Wolfe, Arthur Miller and more. 60s, Arthur C. Clarke, Bob Dylan, Janice Joplin and others stayed and worked on the creation. It was purchased by another entrepreneur in 2011 and closed. After renovating and remodeling, it is now open as a general hotel. In 1966, it was registered as the Historic Building in New York, and in 1977  it was registered as the National Register of Historic Places in the United States.

＊2  Rutgers, the State University of New Jersey:
Founded in 1766 before Independence of U.S., Rutgers is the eighth oldest prestigious university in the United States. Through the influence of Protestant Missionary, Guido Herman Fridolin Verbeck, who was an advisor to the Meiji government, many Japanese (who later became government dignitaries) were studying at Rutgers. It is a university with close ties to Japan.

＊3   Lehigh University:
Founded in 1865. Established with the educational idea of bringing up of a competent person with high technology in specialized fields and a wide range of general education.

＊4   Brooklyn College of The City University of New York:
Founded in 1930. Established as one of the City University of New York systems. As a renowned faculty member, Allen Ginsberg (1926–1997) was an American poet and activist, one of the representatives of beat generation literature with Jack Kerouac. Abraham Harold Maslow (1908-1970 ), American psychologist. Maslow's personality theory is commonly known as the "self-realization theory (desire stage theory)".

＊5    Columbia University in the City of New York:
Founded in the British Colonial Era (1754). Established as King’s College by the Imperial sanction of King George II of England. It is the fifth oldest in the U.S. Kent Hall was once used as a building for Law School. After Law School had moved away, the faculties of East Asian Studies, including the East Asian Library, were acquired in 1962. As researcher of Japanese literature and culture at Columbia University, Donald Keene is an emeritus professor.

＊７   Sarah Lawrence College:
Established in 1926 as a women's college, and it has been a coeducational college since 1966. It is well-known in the fields of the humanities, performing arts and writing. Famous faculty members include Martha Graham (pioneer of modern dance), Susan Sontag (writer and critic), Marguerite Yourcenar (French novelist, “Nouvelles orientales” (1936), “Mémoires d'Hadrien” (1951), etc.),  Joseph Campbell (mythologist, “The hero with a thousand faces”,  “The power of Myth”, etc.).

＊ 8    Nobuya Abe:
1913-1971.  His poem and drawing collection "Fairy Distance"(1937) with Shuzo Takiguchi attracted attention at a young age. After the war, he changed from surrealism to art informel, and to geometric abstraction, and exhibited at numerous international exhibitions, including the São Paulo Biennale. He spent nearly a decade in Italy in his later years.

＊ 9   Victor Pasmore:
1908-1998. English painter. Under the influence of Cubism, he painted abstract paintings from about 1948. From about 1951, he produced reliefs and three-dimensional works of colored wood, and became a representative abstract artist in England. In 1960, he represented the United Kingdom at the Venice Biennale.