For a One-Man Show

Another purpose of Nankoku's visit to the United States was to ask whether the calligraphy as his abstract art could not be accepted by Westerners from exotic interests, but could be positioned as a global line art. For this reason, from his first visit to the U.S., he was taking various steps toward the goal of holding a one-man show in New York. He was applying for an extension of his visa (he asked principal Schaeffer and a lawyer), and also kept actively in contact with Japanese living in the U.S. and in touch with Mr. Langston, director of the Japan Society in New York.

Principal Schaeffer and other artists in San Francisco were very interested in the ancient calligraphic books and rubbings which Nankoku carried, and inquired about the price of buying only a piece of rubbings, too. So, Nankoku planned for his one-man show to exhibit rubbings along with his works. Around the middle of April, he met Michel Tapié of France (*1), who had just arrived in San Francisco, and also Tapié begged Nankoku to spare him a piece of rubbings.
From the end of May 1960, Nankoku held his one-man show and at the same time, he held dozens of rubbings exhibition from China and Japan at the David Cole Gallery. In particular, "Rubbings Exhibition" gained a great reputation and the introduced articles appeared not only in the local newspaper of San Francisco but also in newspapers of New York. In those days, there were few exhibitions of rubbings with entire inscriptions (not cut and arranged rubbing, no form of book) in galleries and museums specializing in Chinese art in Europe and the U. S., so this exhibition must have surprised and impressed Occidentals.

Originally, ‘rubbing’ is a unique artistic culture of China and Japan, and it is rarely seen in the West. The human workings to write or engrave letters on natural rocks, monuments, and tombstones may be confirmed in various primitive cave paintings or rock paintings, and also from historic times, in Mesopotamia or Egyptian Civilization, Greek or Roman Art, and Christian Art, etc., as well as in Chinese Civilization. However, the letters on stone and the epitaphs are not rubbed and copied with paper (rubbing) in the West.

Occidentals saw Rome's war memorials or their reliefs, but used not to make a rubbing for their appreciation. Occidentals did not consider an object of faith in a way of making a rubbing of the epitaph of the saint. The letters of the Bible were not made rubbings. In the West, monumental inscriptions and epitaphs were copied on parchments or papers. In the West, the inherited Bible was accurately made a manuscript copy. The letter on the natural rock or the sacred image is the word which expresses faith in it. Because Biblical manuscripts also express faith in the word, they are more beautiful and noble than the originals (decorative manuscripts). The Rosetta Stone of the 19th century was also deciphered by Champolion from a written copy of the original monument.
The written letters on the rocks of nature or on the stone monuments express people’s faith in the letters (words) as reverence for nature or as commemoration of the achievements by construction of monuments. However, the rubbing of the letters (words) did not represent the faith, but rubbing came into existence as an art in which people appreciated the form, arrangement of the letter and the balance of black and white etc., as an aesthetic object. It can be said that rubbing is proof that calligraphy does not serve the purpose of the faith and a political or historical effect, but it exists exactly as free art from such a purpose. 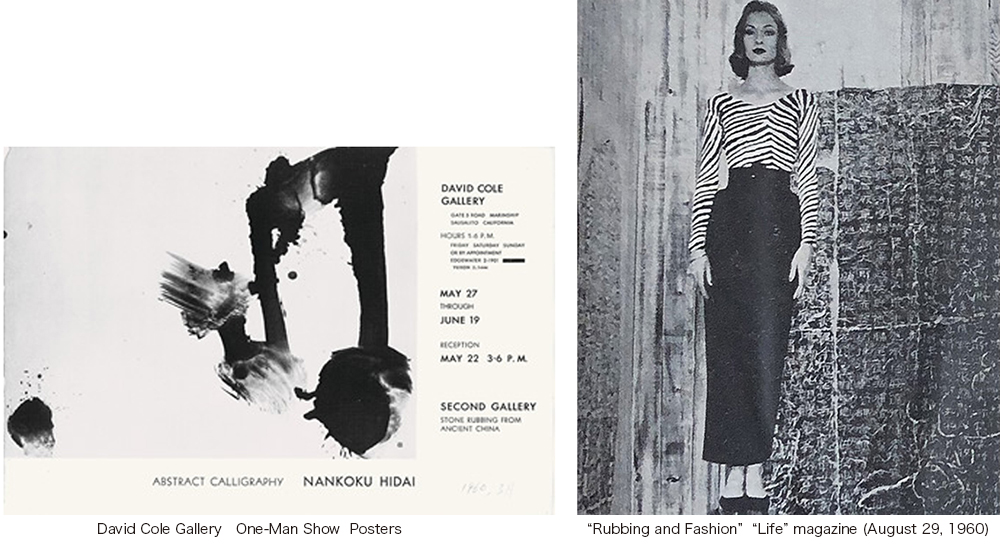 1961
January 4 -January 28      Mi Chou Gallery (* 4) in New York "One-Man Show" (Madison Street, New York)
Nankoku’s “One-Man Show” at Nippon Club received a good reputation, and then his “One-Man Show” at  Mi Chou Gallery caused a great response, so more than 10 works of Nankoku were purchased. The main purchasers were “the Museum of Modern Art” in New York (*5), the MoMA's first director, Alfred H. Barr Jr. (1902-1981), Mrs. John Rockefeller III (*6), architect Philip Johnson (*7), and others.
The Museum of Modern Art especially held a luncheon because of the great response of “One-Man Show” at  Mi Chou Gallery. The party was attended by representatives of the MoMA, Dernancourt, Seltz, as well as representatives of the Rockefeller Foundation and artists such as Motherwell (*8), Isamu Noguchi (*9), and others. They actively talked about calligraphy with Nankoku.

After his one-man show, Nankoku returned to San Francisco to prepare for his future activities in the U. S. in1961. In Spring Semester 1961, the Rudolf Schaeffer School of Design was scheduled to have Nankoku lecture  on " Oriental Calligraphy" 10times during Spring Semester , on Monday afternoon for 90 minutes. This schedule was clearly stated in the application pamphlet. In June, he was making plans of the lectures at the Museum of Modern Art in New York and Carnegie Institute of Technology, and in the fall, he would plan to hold ” Avant-garde Calligraphy Exhibition in Memory of Tenrai Hidai " at Mi Chou Gallery in New York.

Nankoku's wife, Shoha (小葩) was repeatedly begging for his return home, fretting herself about his prolonging stay in the U.S.

At that time, Shoha became unwell owing to high blood pressure and took to her bed. Nankoku worried about his wife's physical condition and decided to return home anyway. He refused to give lectures in the future (he declined to lecture at the MoMA by long phone for more than an hour). He announced to the Schaeffer School of Design that his classes would be ended five times until mid-April. Nankoku wrote his surprise in airmail to his wife: "My excuses of wife's sudden illness" are soon accepted generously in the U.S.”  Nankoku hurriedly returned home by plane at the end of April, 1961. 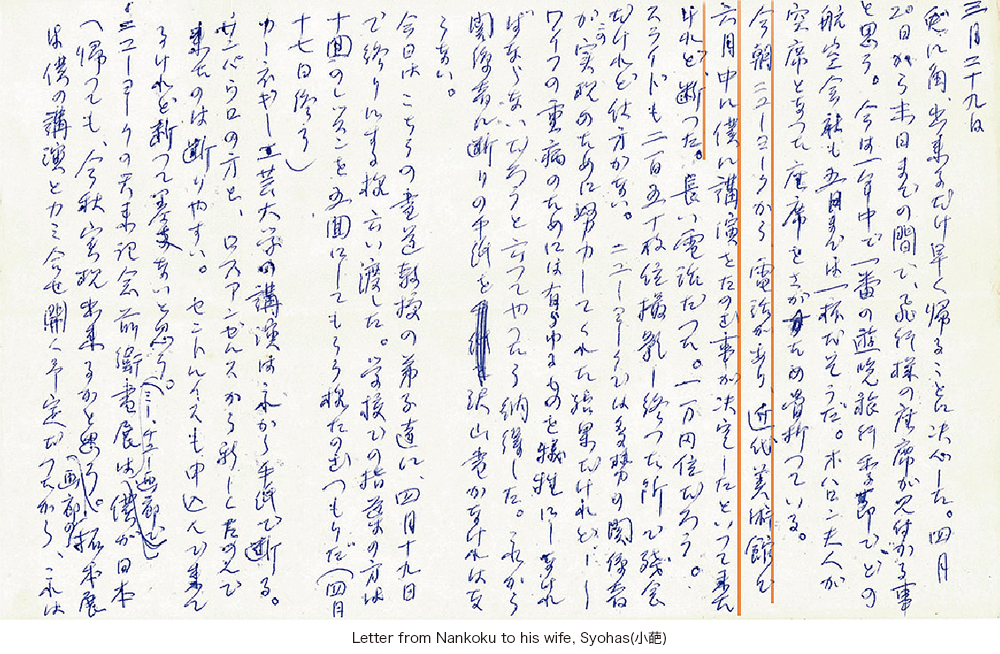 He refused to give a lecture at the Museum of Modern Art in New York and reported that he would return home.

*1  Michel Tapié (1909 –1987)
Tapié was a practical artist of Tachisme that was equated with abstract expressionism. He was an advocate of the word ”Art informel”. Tapié called the French lyric abstract artist, Georges Mathieu, a champion of early ”Art informel”.

*3  Nippon Club, New York City
A social club of membership system. It was founded as the Nippon Club in 1905. The first president was the famous chemist Jokichi Takamine (inventor of Taka-Diastase, discoverer of adrenaline). Ever after, it was active in the Japan-U.S. exchanges and to promote friendship between Japanese entrepreneurs living in New York and their families.

*4  Mi Chou Gallery
Mi Chou Gallery was opened by Frank Fulai Cho on Madison Street, New York in1954. It was the nearly first art gallery in the United States to specialize in the exhibition and sale of classical and contemporary Chinese art. Mi Chou Gallery was made famous by the exhibition of Chen Chi-kwan (1921-2007) in 1957. He was renowned as Taiwanese artist and architect, worked under Walter Gropius, and after returning to Taiwan he founded the Department of Architecture of Tung Hai University in Taiwan. The "decorative colors, architectural lines, and mystic spaces" of his paintings were said to "inspire us to see our environment in a new light." After Nankoku’s one-man show in 1961, he also held an exhibition at Mi Chou Gallery.

*5  MoMA     The Museum of Modern Art in New York (founded in 1929)
The museum was proposed in the late 1920s by 3 women’s collectors, L. P. Bliss, M. Q. Sullivan, and A. A. Rockefeller, and the museum was founded in 1929. The first director Alfred Barr Jr. was only 27 years old (director 1929-1943). It is famous as a "Hall of Contemporary Art" after the 20th century. The exhibition "Cubism and Abstract Art" (1936) organized by Alfred Barr Jr. himself made the world esteem for the leading museum of modern art.  Alfred Barr Jr. is vividly depicted in “Modern“ by Maha Harada ( Bunshun Bunko).
The board of directors of MoMA listed a number of famous people, such as the Rockefeller family, who had strong leadership in the economic world, and they took the lead in raising funds of MoMA. 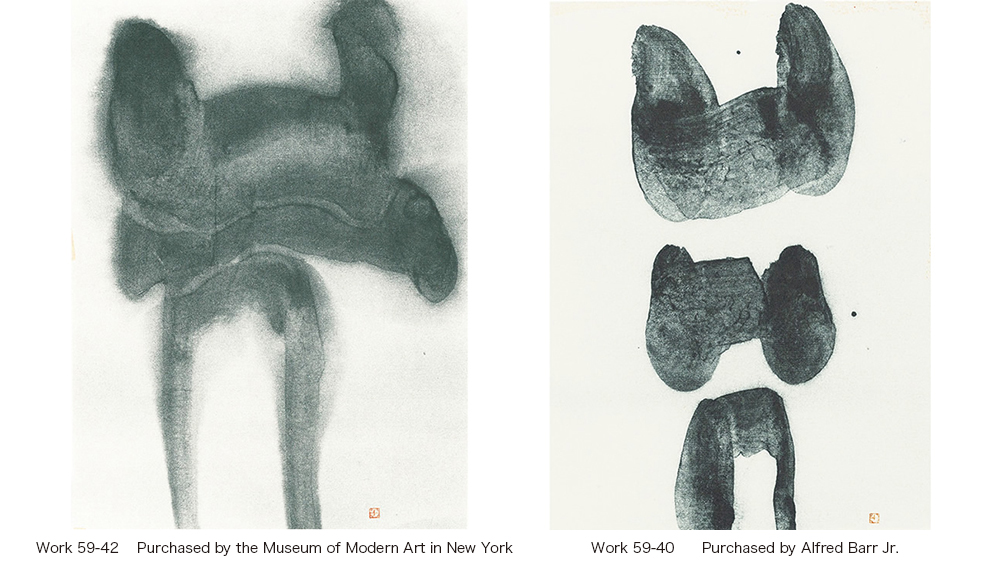 *6  Mrs. John Rockefeller III
The Rockefeller family is one of America's leading wealthy family and is famous as the business executive and philanthropist. The first John D. Rockefeller (1839–1937) established Standard Oil Company, which controlled 90% of American oil and was considered the richest man with the largest assets in history. After retirement, he spent most of his assets on charitable works and created the Foundation for the purpose of promoting the research in medicine, education, and science. Rockefeller II, known as an entrepreneur of cultural promotion, founded the Rockefeller Foundation and Rockefeller University. The second son of Rockefeller II, Nelson Aldrich Rockefeller served as the 41st Vice President of the United States (when Ford was President ). His eldest son, John Davison Rockefeller III (1906–1978) was also a cultural entrepreneur, and  chairman of the board of directors in Japan-America Society, president of Japan-America Society of New York, and executive director of cultural and academic organizations. Rockefeller III’s wife, Mrs. Blanchett H. Rockefeller (1909-1992) took over  the works of the Asian Cultural Program. She purchased Nankoku's Works 59-11.

*8  Robert Motherwell (1915 – 1991)
He supported members of the New York School, such as Jackson Pollock, Willem de Kooning, and Mark Rothko, and developed the movements of Abstract Expressionism with them.

*9  Isamu Noguchi(1904–1988)
He was sculptor and painter, born in America. Founder of landscape art, blending abstract modernism sculpture with gardens and nature. He worked extensively with artists from other fields and was one of the leading artists of the 20th century.