Nankoku's first visit to the United States was over a span of 1year and 4 months, from November 26, 1959 to April 1961. Nankoku was invited as a lecturer on Chinese and Japanese calligraphy at Rudolph Schaeffer School of Design (*1) in San Francisco. The occasion to visit the U.S. was introduced by Mr. and Mrs. O'Hanlon who were both American artists and had got acquainted with Nankoku in Japan. When Nankoku went to the U.S., he carried 1,000 ancient calligraphic books and dozens of rubbings in order to teach students how to understand and appreciate calligraphic art correctly. Before the liberalization of overseas travel (1964), the contents of travel purposes and taking-out dollars were limited, and visas were issued strictly. The application form was complicated, the bank balance certificate was required, and also baggage was limited.

There were no direct flights to the U.S. mainland, so he took the flight from Haneda to San Francisco by way of Hawaii. In San Francisco, he rented rooms on the first floor of Philippe Mutrux's house and made a studio (atelier) in the basement by himself. Philippe Mutrux kept friends with Ann O'Hanlon. 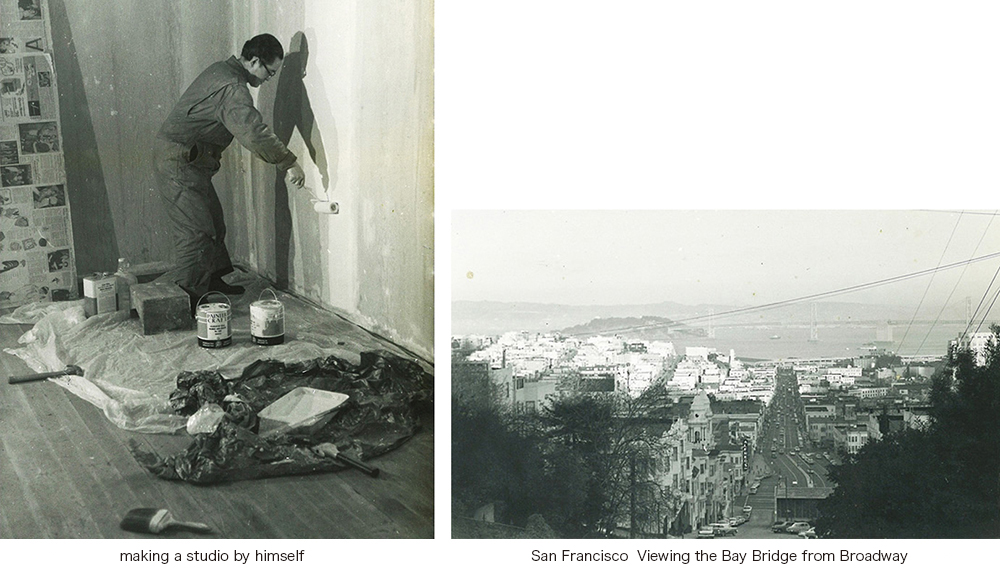 At the Rudolph Schaeffer School of Design, Nankoku lectured on the history of Calligraphy in China and Japan, on the fundamentals of Chinese character (kanji), and also on the method of calligraphic writing (篆Seal style, 隷Clerical style, 楷Square style, 行Half-running style or Semi-cursive style, 草Running style or Cursive style) in “Beginner’s Class on the Oriental Calligraphy”. At the beginning, he taught 10 classes in 90 minutes once a week during 1960 Spring Semester (1/30 -5/26).

His lectures met a favorable reception, and by favor of the principal Schaeffer, Nakoku had "Advanced class" and another “Beginner’s Class” again from September,  so he taught classes twice a week. In addition, with the efforts of Ann O'Hanlon, he gave artists and citizens the private lessons about how to use brushes and ink at his completed studio.

At the opening party of his studio, the professors of the Schaeffer School of Design, the painters in California and his students gathered, and it became a lively party. Nankoku left Japan, and for the first time he was able to express himself frankly and honestly as one person and one artist, regardless of formality or title.

On weekends when there were no classes, he was invited to the Residence of painter Ford in Inverness which was located on the west bank of Tomales Bay in San Francisco's northwestern Marin County, and he visited Samuel P. Taylor State Park and also tried rubbings of rocks on the shores of Bolinas Beach of the south shore of Drakes Bay (*2) on the Pacific Ocean (June 8). He also extended his visit to Yosemite National Park on the western slopes of the Sierra Nevada Mountains. He tried rubbings of rock and glacier surfaces in Yosemite Valley which was worn away by the glacier.

Before his visit to the United States, Nankoku believed that "the artistic essence of calligraphy was in the expression of trained brush lines, so the material was just a medium", and in order to prove that the essence of calligraphy was not in the material (matière) such as "brush, ink, paper",  he continued various attempts with oil paintings on canvas, lacquer boards, and produced works scratched with pieces of bamboo without brushes, or works on old rubbings etc., after 1954. The works exhibited at the São Paulo Biennale just before were part of his attempts. Nankoku might have tried the matière of the original nature by encountering nature in the United States different from Japan.

At the end of 1959, I was invited by Mr. and Mrs. O'Hanlon, professors of sculpture and painting at the University of California, and I went to the U.S. to introduce calligraphy to American people. It was a main purpose to introduce orthodox calligraphy, therefore I carried about 1,000 ancient calligraphic books, rubbings, and copybooks. I taught calligraphy at the design school in this city (San Francisco), and I gave private lessons to the public, too. The American people like efficiency in everything. I also contrived a quick-acting guidance method. I taught them once a week, for 2 hours at a time, and completed 1 course at 10 times, in the meantime, starting with the basic usage method of brush, and performing practical skills in each style of 楷 (Square style), 行 (Half-running style or Semi-cursive style), 草 (Running style or Cursive style), 篆Seal style, 隷 (Clerical style or slavery style). I used copybooks of calligraphy not only the classical calligraphic books in the Han (漢), Wèi (魏), Liù cháo (六朝) but also ‘ancient Chinese characters inscribed on oracle bones and tortoise shells’ (亀獣骨文字) in the Yin (殷) or bronze-vessel and bell inscriptions (鐘鼎文).

On the other hand, I taught the Japanese calligraphic books from 3 famous ancient calligraphers (三筆): Emperor Saga and Tachibana Hayanari and Kobo Daishi (Kukai)and 3 most famous calligraphers (三跡): ONO  Michikaze, FUJIWARA  Sukemasa and FUJIWARA  Yukinari to Hakuin and Ryokan. I was a calligraphy professor who should be called astronaut teaching at super high speed.

Basic training to make calligraphy learn was the most important matter because Americans did not know how to write with the brush, although they knew how to paint with it. However, once they had obtained this, it was found that their understanding of calligraphy was no less than that of Orientals. I was very pleasant that they have made a unique work with a pure impression in their own way of reception, though it was not sure to be able to understand profundities by such a rapid training.

My beloved pupils were mainly professors and artists in a leading position, so they were quick to understand, and the good point of their works was not a childish simplicity seen in children’s works. This point was admitted equally by the expert calligraphers in Japan who saw these works after returning home.

Of course, because there was no time to teach them the meaning of the Chinese character, it was possible to understand calligraphy purely as a line art, although on occasions they looked at the inverted copy of calligraphic books.  My aim was not just to instill Orientalism into them, but to try to decide whether the unique abstract art with history of 3,000 years would be properly accepted by the American artistic mind, so I was satisfied with this result.

I liked to try rubbing on the stone surface of the natural stone for a long time, and wanted to try it in the foreign country. I happened to get a chance to play in Yosemite Valley of Yosemite National Park, last summer. When I saw the vast craggy mountain and the grand glacier, I was astonished the view. Then I tried rubbings on stone or glacier surfaces in high spirits, but after a while I was disappointed with their prosaic taste like the taste of food in the United States. I felt that the sort of taste was different from Japan. (omit the rest)

*2 Drakes Bay
Named after Admiral Francis Drake of the Royal Navy, who defeated the Spanish Invincible Fleet. After Magellan, he achieved the second round of the world in history. There is a saying that he landed here in California.