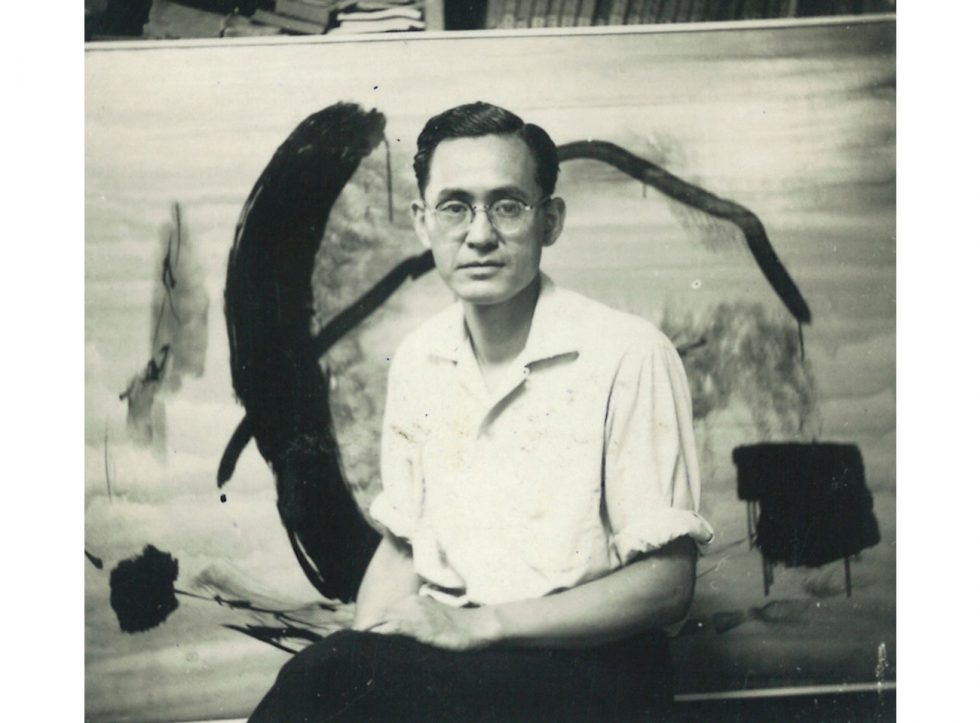 Nankoku rarely explained his ‘Sho’ (calligraphy) using literary or social ideas. It seems that this is the only place where Nankoku used the word "social existence". What is "the social existence" of Nankoku really?

First, the entire document is shown. The wording which is not used today is seen, but it is left as it was because of a historical writing. The contents of square brackets (［ ］) are notes written by Nankoku himself later in the published sentences. 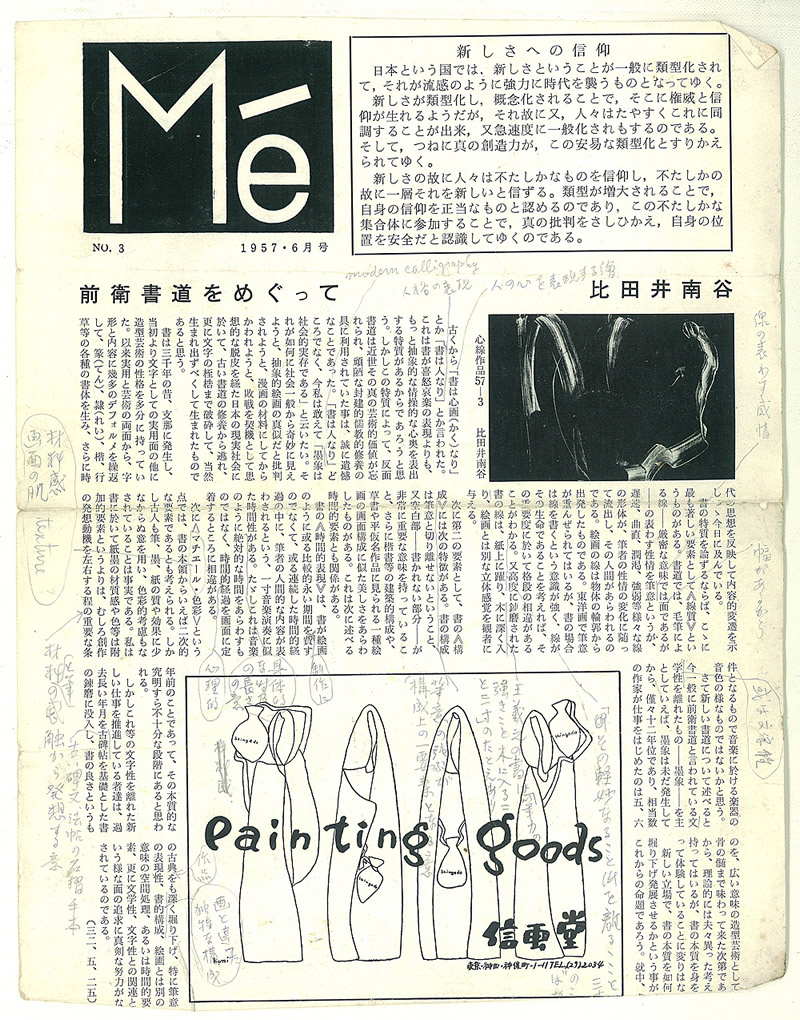 It has been said from ancient times that "calligraphy is a mind picture" [picture expressing a person's heart］or "calligraphy is a person" [expression of personality].  I think that the reason for these sayings is because the calligraphy could have the ability to express the depths of a more abstract and moral heart than the expression of emotion. However, on the other hand, owing to these characteristics, the true artistic value of calligraphy had been forgotten in early modern times and calligraphy had been used as tools of obstinate feudal Confucian mind cultivation. It was a truly regrettable matter. I want to dare to say now, " modern calligraphy (Ink Form) is the social existence", far from "calligraphy is a person". No matter how strange it may seem from society in general, no matter how severely it may be criticized as an imitation of abstract painting, and no matter how often it may be ridiculed as a subject of cartoons, I think that it was born in the real society of Japan which passed the innovation of thought with the defeat, getting away from the mental cultivation of old calligraphy, and breaking up fetters of the character further. So, I think that it was born naturally as a matter of course.

The calligraphy occurred in China in old days of 3,000 years ago and had the nature of the figurative art in addition to the practical side as the Chinese character from the beginning. Since then, it has repeatedly made a number of deformed forms and contents of the character from both practical and artistic sides, and has been changing the various type of forms such as 篆 seal style, 隷 clerical style, 楷 square style, 行 half-running style or semi-cursive style, 草 running style or cursive style and also shifting its contents, reflecting the thought of the times.

If the characteristics of the calligraphy are discussed, here is the most remarkable element, namely ≪the quality of line≫. In calligraphy, the line by the brush—a plane in a strict sense [because there is width]—expresses the nature, namely ‘Hitsu-I’ (the exquisiteness of work which brush lines express) [sentiment which the line expresses]. The form of various lines such as slow or speedy, curved or straight, wet or dried, and strong or weak, etc. flows out with the change of writer's sentiment, so the writer’s personality appears in its line. The lines of paintings start from the outline of the object. In the Oriental painting ‘Hitsu-I’ is considered very important, but in the case of the calligraphy, it appears that there is a great difference in the importance if calligraphers have strong consciousness of writing the line and the line is the heart in calligraphy. Moreover, the line of the calligraphy which was highly disciplined leaps on the paper [There is a word which the light line leaped over the paper three-sun-height], and enters the tree deeply, [There is a parable that “the calligraphy of Wang Xizhi entered the tree three-bu-depth with strong power of a bush stroke”], so it gives the three-dimensional sense different from the painting to the spectators.

Next, as a second element, there are the following characteristics in the ≪construction≫ of calligraphy. The construction of calligraphy is inseparable from Hitsu-I [the strength or weakness of Hitsu-I is a component of the construction], and the blank part— the part that is not written—has a very essential significance, and there are some that show the beauty similar to a kind of the pictorial composition of painting, such as the architectural construction of 楷 square style or the beauty in 草 running style or cursive style calligraphy or the works of Hiragana. This is also related to the time element described as follows.

The ≪time expression≫ of calligraphy has time like the musical performance in which the calligraphy does not spend a relatively long period like painting [in production], but in a certain continuous passage of time, the human content of the calligrapher is expressed. However, this does not show absolute time like music [meaning of the concrete length of time], and there is a difference in the point where a psychological course settles on the paper.

Next, <matière [sense of material / texture] and color> are thought that they are secondary elements from the nature of the calligraphy. However, it is true that the ancients also had not a little intention to the quality and the effect of brush, ink and paper, and took color into consideration. I think that the sense of material and color etc. of paper or ink are not an additional element in calligraphy, but rather the one which becomes a condition so important as to influence the motive of the creative conception [meaning of conceiving from the touch of the material and the brush], and it is like the tone of the musical instrument in music.

Well, when describing a new calligraphy, I designate mainly the calligraphy which is now generally called the avant-garde calligraphy—Ink Form—. Ink Form is only about 12 years after it occurred. It parted from the literary contents or from the character and it seems that it was 5 or 6 years ago that a considerable number of calligraphers started to work, and even its essential investigation seems insufficient stage.

However, those who are promoting new work leaving off the characters have been in common that they have personally experienced the essence of calligraphy, though different from each other in theory, since they have immersed themselves in disciplining calligraphy based on ancient monument calligraphic books [old inscriptions, stone rubbing books] and have experienced the value of calligraphy to the bone as the figurative art in a broad sense.

In a new standpoint, how to delve into and develop the essence of calligraphy will be the proposition of the future. Above all, under their investigations, they also delved deeper into the classical works of calligraphy and made serious efforts to pursue aspects such as the expressive power of Hitsu-I, the calligraphic construction [unique construction different from the picture], the spatial treating with a meaning different from the painting, or the elements of time, and moreover the relation between literature and character.
(May 25, 1957)

It is Shuzo Kuki (1888［Meiji 21］) ~ 1941［Showa16］) who translated the philosophical term “Existenz” (originally ‘ex-sistere’, "out—standing") of M. Heidegger and K. Jaspers into Japanese, as “実存” ("existence") shrinking "actual existence". He used this term for the first time in the "Existential Philosophy" published in 1933 (Showa8). Kuki studied in Europe from 1921 to 1928 and studied under H. Bergson and Heidegger (his chief work, “Sein und Zeit”, ‘Being and Time’, 1927). After returning to Japan in 1929, he introduced French philosophy and especially Heidegger’s philosophy, and played a major role in the acceptance of Heidegger's existential philosophy in Japan.

Heidegger grasps the ‘meaning of being’ in the actual there-being as ‘Temporality’. How the actual there-being understands oneself is also bound by ‘Tradition’. Tradition, for Heidegger, is the object of demolition and destruction. The tradition is not to make ‘something to deliver’ approachable, but to conceal it. So, only through destroying the rigid tradition, the concealed ‘Truth’ will ‘make itself visible’. To discover the meaning of being through crushing ‘concealed way of being’, that is, the destination of Heidegger's existence was oriented there. 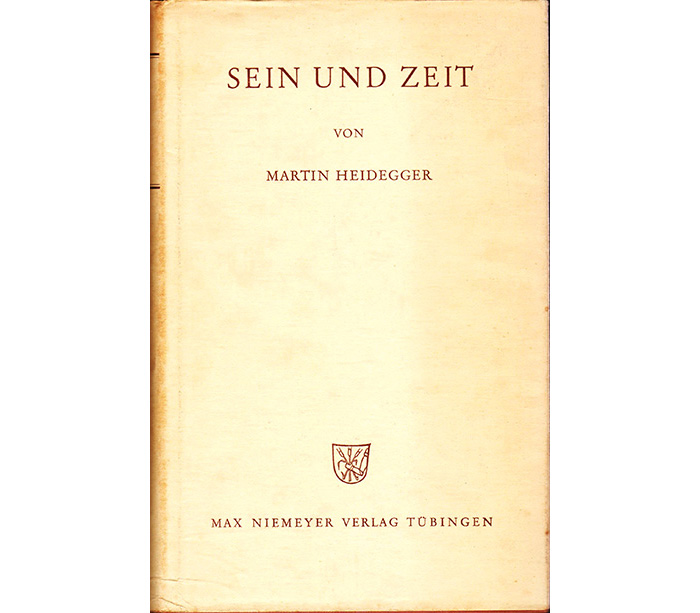