The first report of Nankoku’s activities presents his witty essay about the essence of “Sho”in the Asahi Shimbun dated August 1 in 1961, based on his experiences in the first visit to the United States.

* Click on the image of the newspaper to view in it as a PDF.

For the purpose of introducing “Sho”(calligraphy), I visited the United States at the end of the year before last,  and stayed in New York and San Francisco for a year and a half.  Both for the Americans and for me, the most beneficial experience was that I took their hands directly and taught them “Sho”, and so let them experience “Sho” and let them create something new.

When coaching them, I used many typical calligraphic books of ancient China and Japan. There was no field of the line expression in the history of the art that they had experienced, therefore "Sho" was a completely new means of expression for them. So, when I made them have the “Fude(writing brush), they tried to paint without trying to write. First, I meant to let them experience the line expression directly , so as to make the line expression understand rather than to teach the meaning of the “kanji” (Chinese character). It was not uncommon that they   looked at the inverted copy of calligraphic books and learned it carelessly; on the other hand, their pure and youthful mind understood the exquisiteness of “Sho”, and they created the excellent works of “Rinsho”(copy and study the ancient calligraphic books) one after another. I carried their “Rinsho”works back to Japan and when I showed the works to my friend's calligraphers, they were surprised that the expression of works was all free and their understanding of “Sho” was clear.

What pleased me the most was that Americans showed sympathy with the pure artistry of “Sho”, and at the same time, that I was able to conduct effective experiments and strengthen my convictions about my theory of “Sho” of long standing. It is a mistake that Americans cannot understand “Sho”.

I think that the calligraphy which I understand from the inquiries into the classical calligraphic books is expression of a human being through the line, regardless of the literary meaning. I threw the literary meaning of the character away 16 years ago, and I have continued works pursuing the beauty of "Sho" ever since.

At present, I don’t create works using the letters of “kanji” (Chinese character) very often, because it happened to move away from the character, as a result of extracting the essential artistry of “Sho”. There is a loud voice now that my work is not "Sho" . The conservative calligraphers feel annoyed at my workwhen it is said that this is “Sho". Traditional calligraphers keep the legacy of calligraphy in their chest of drawers. They don't know how to use it.

By the way, when the work about the image of summer was requested this time, I stood aloof the meaning of the character, and I endeavored to create the work which matched this request, but it did not go well easily although I struggled variously to make this work.  This may be due to my busy and hurried life these days.

In a word, I sometimes use a certain character as a material, and sometimes develop it, or do not so. I usually  make a lot of sketches, add various shapes to the first idea, reduce shapes, try deformation, and so my form of the character is created in my mind after all.

As my last resort, I chose this work from a sketch made for "Work No. 61-1", one of the recent works prepared for the exhibition of the “Japanese Contemporary Sumi Painting (Sumi-E)” , touring the U.S.  Because this work includes the fragment of the ’tensho’ (篆書 ancient style of Chinese characters, Seal－styles ) expressing ‘water’ by chance,  I suppose that it is not be unrelated to summer at all. 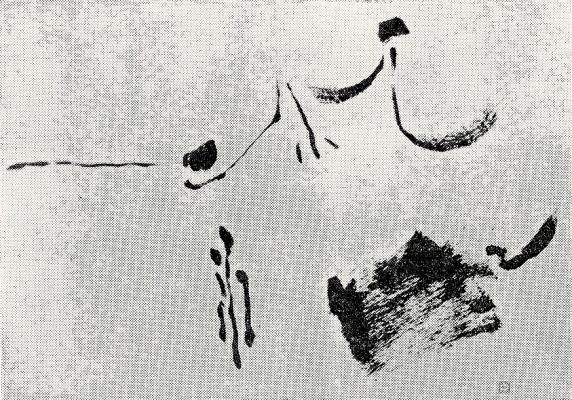 Even if the person looks at this work and imagines the summer scenery of the sea and the cloud from this work, I ‘m not troubled with it at all.

There are many phrases which are not a mere description of “Sho” but compare the artistic abstract content of “Sho” to the natural scenery, such as "Heavy like the collapsing cloud" or "Thin and Slender as the first moon goes out from the end of the heavens" in the words which describes “the exquisiteness of Hitsu-I” (the exquisiteness of work which brush lines express) in the ancient calligraphic books.

Moreover, more positively, by getting the opportunity of looking at my work, both the person who is very good at “Sho” and the person who humbles himself to be poor at “Sho” can try to ‘Rinsho’ (copy and study) the inverted copy of calligraphic books with similar feelings to the Americans’ easily, pretending to go to the Kappa country for pleasure. If so, this is also one way to cope with the summer.