vol. 3  The Sounds of Japan 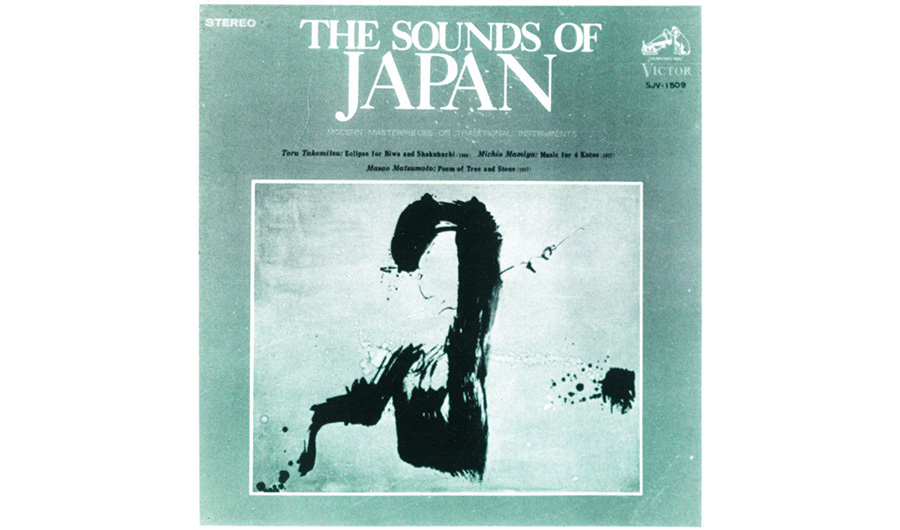 There is a copy of one record jacket. Nankoku‘s work is used on the cover of the jacket, titled“The Sounds of Japan”.  Small letters on the jacket make us difficult to read, but Toru Takemitsu : Eclipse for Biwa and Shakuhachi (1966), Michio Mamiya : Music for 4 Kotos (19?? ), Masao Matsumoto : Poem of Tree and Stone (1957) can be seen. It is a stereo record of Victor's SJV-1509.

ToruTakemitsu (1930-1996) joined the Experimental Atelier; the art group organized by artists from artists from various fields under Shuzo Takiguchi, as an organizational member with composer Joji Yuasa in 1951 (at the age of 21). He worked on contemporary music, electronic music, concrete music, etc., and was active as an avant-garde composer. He also composed a lot of film music, for example in the 1960s “HARAKIRI” (1962) directed by Masaki Kobayashi, “Suna no Onna (The Woman In the Sand)” (1964) and "Others' Faces" (1966) directed by Hiroshi Teshigawara, and in “Kwaidan” (1965) (director: Masaki Kobayashi) he used biwa and shakuhachi.  "Eclipse" (1966) included in this record, was the monumental duet into which the soloists of biwa and shakuhachi were received for the first time. In this duet the sound of  biwa and shakuhachi fought each other like a jazz jam session. This "Eclipse" was passed down to Leonard Bernstein of the New York Philharmonic through conductor Seiji Ozawa, who was active in the United States. Then a piece of music that Bernstein commissioned Takemitsu to compose was "November Steps" (1967) on biwa, shakuhachi, and orchestra. With this work, Toru Takemitsu became a world-renowned contemporary composer.

“The Sounds of Japan” include such other music; "Music for The Four Sos(筝・Koto)" by Yoshio Mamiya (1929-) as the title of this jacket represents. Mamiya organized “山羊の会”(Goat Association) with Hikaru Hayashi and Yuzo Toyama in 1953. He is designated as a representative of the Japanese ethnic music group, and his works are mainly made from Japanese folk songs. He has also composed for Japanese musical instruments since the early days, including “Music for Three Sos” (1958) and “Quartet for Shakuhachi, Sangen (Samisen), and Two Sos" (1962). Masao Matsumoto ( 1915-1996) was also active in the world of contemporary Japanese music as a koto player and composer after the end of the war. In 1950 he founded “Asahikawa Philharmonic”, and in 1957  his "Poems of Wood and Stone" won the First Prize in the Japanese Music Competition, the Minister of Education Award, and the NHK Award.

“Eclipse: Masterpieces of  Contemporary Japanese Music”, which includes three pieces of above-mentioned music, was published by Victor's music book in 1971. But this picture shows the jacket of a record.

Around 1960, Nankoku had a friendship with Toshi Ichiyanagi (and Yoko Ono together) under the influence of the rising avant-garde composer John Cage, and also was acquainted with Toshiro Mayuzumi. Nankoku’s work on this jacket is “Shin-Sen Work No.58-38” (Spirit Line Work No.58-38).

This work was exhibited at “ Hidai Tenrai Kinen Zen’eisho-ten” (Avant‐garde Calligraphy Exhibition in Memory of Tenrai Hidai)(1958), afterward at “One-man show, Mi Chou Gallery” in New York (1961) and at the touring exhibitions in Europe, finally this work was supposed to be longed to Urvater (collector?), but its whereabouts is unknown.